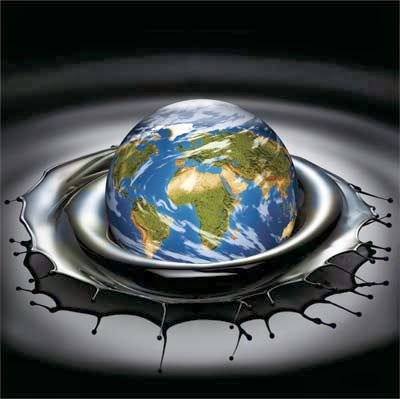 Record-breaking heat waves and droughts, flooding and the Polar Vortex have pummeled most of the Earth in recent years  and, we're told, this is a glimpse of even more extreme weather in our future.

Christiana Figueres, the United Nations climate chief, looks at the devastation and sees a silver lining - the prospect that these impacts and the losses they occasion will finally move climate change to the top of the global political agenda.  She says that partisan political bickering has to go.

Christiana Figueres said that it was amoral for people to look at climate change from a politically partisan perspective, because of its impact on future generations.

The "very strange" weather experienced across the world over the last two years was a sign "we are [already] experiencing climate change," the executive secretary of the UN climate secretariat told the Guardian.

Climate change was barely mentioned at all in the 2012 US election battle until superstorm Sandy struck New York, prompting the city's then mayor, Michael Bloomberg, to endorse Barack Obama's candidacy because he would "lead on climate change."

Figueres said: "There's no doubt that these events, that I call experiential evidence of climate change, does raise the issue to the highest political levels. It's unfortunate that we have to have these weather events, but there is a silver lining if you wish, that they remind us is solving climate change, addressing climate change in a timely way, is not a partisan issue."

Memo to Steve, Justin & Tom:  Bitumen trafficking and saving the planet for our grandkids are mutually exclusive.

This is clearly man-made but greenhouse gas emissions are the culprit. I have seen nothing persuasive in the HAARP or chem trail claims. They seem to be the stuff of conspiracy theories. HAARP, by the way, has been shut down. Then again, we don't really need exotic theories to explain the very real damage we are causing.