Were the Maidan Murders the Work of the Ukrainian Opposition, a Staged Provocation? 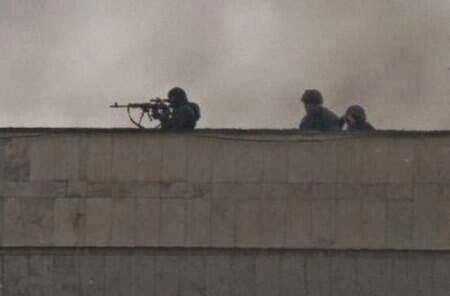 We know that in the Ukrainian unrest, no side has clean hands exactly.  The pro-Europe group we're backing is generously laced with some pretty nasty types.  One incendiary moment that sparked the Ukrainian revolt was the sniper attack on Ukrainian police and civilians, the so-called Maidan murders.  The killings have been blamed on snipers supporting ousted president Viktor Yanukovych.

An intercepted phone conversation between the EU foreign affairs chief Catherine Ashton and Estonian foreign minister Urmas Paet suggests the snipers might have been provocateurs working for our side, the coalition.

In the call, Paet said he had been told snipers responsible for killing police and civilians in Kiev last month were protest movement provocateurs rather than supporters of then-president Viktor Yanukovych. Ashton responds: "I didn't know … Gosh."

The leak came a day after the Russian president, Vladimir Putin, said the snipers may have been opposition provocateurs. The Kremlin-funded Russia Today first carried the leaked call online.

The Estonian foreign ministry confirmed the leaked conversation was accurate. It said: "Foreign minister Paet was giving an overview of what he had heard in Kiev and expressed concern over the situation on the ground. We reject the claim that Paet was giving an assessment of the opposition's involvement in the violence." Ashton's office said it did not comment on leaks.

During the conversation, Paet quoted a woman named Olga – who the Russian media identified her as Olga Bogomolets, a doctor – blaming snipers from the opposition shooting the protesters.

"What was quite disturbing, this same Olga told that, well, all the evidence shows that people who were killed by snipers from both sides, among policemen and people from the streets, that they were the same snipers killing people from both sides," Paet said.

"So she also showed me some photos, she said that as medical doctor, she can say it is the same handwriting, the same type of bullets, and it's really disturbing that now the new coalition, that they don't want to investigate what exactly happened."

"So there is a stronger and stronger understanding that behind snipers it was not Yanukovych, it was somebody from the new coalition," Paet says.

This is not the approved narrative and therefore the sheeple will rally for freedom not realizing its wearing a fascist flag.

Sigh. Wish that weren't so.

It certainly wouldn't be the first time. That's what the coupsters did in Venezuela in 2002.