It's Not Just Woolly Mammoths Surfacing from Climate Change 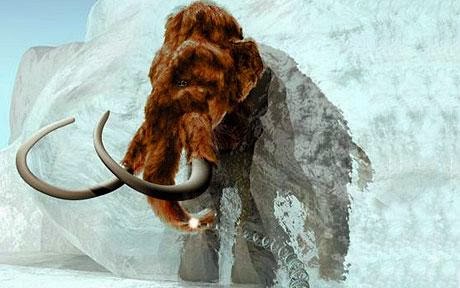 
All it took was a single sample of frozen Siberian soil for an international collaboration of researchers to discover, and revive, a new type of "giant virus" — a virus whose unusually large size means scientists can spot it through a light microscope.
Indeed, despite being frozen for over 30,000 years, Pithovirus sibericum still packs a punch: a simple thawing procedure allowed it to infect a throng of unsuspecting single-cell organisms for the first time in thousands of years. And given that climate change is already causing the ground to thaw in regions such as the Arctic and parts of Alaska, scientists fear that this lab experiment could eventually take to the field, leading to the spontaneous revival of ancient and unknown viruses.
The discovery puts the concept of "viral disease eradication" in a bit of a jam, says Jean-Michel Claverie, lead author of the study and evolutionary biologist at Aix-Marseille University, because it means that there could be a slew of "eradicated" viruses — viruses such as smallpox, which caused its last infection in 1977, and the livestock disease rinderpest — laying dormant deep within the Earth's oldest frozen soil layers. "We might be able to eradicate viruses from the surface of the planet," the researcher says, "but that doesn't mean that there isn't a single particle of that virus still alive somewhere."
Now there's worry that flooding could bring back modern scourges such as anthrax.  In Northallerton, England, residents are concerned that flood control construction could uncover the remains of anthrax-infected cattle buried in a local sinkhole 80-years ago.
Anthrax spores can survive dormant for many decades. Animals can become infected with the disease by ingesting spores while grazing.
Northallerton Town Councillor Jack Dobson, who is objecting to the plans, said: “When these animals were buried 80 years ago, there were no regulations like there are now. There was a sink hole down there and the farmer said they just pitched them into the sink hole near the beck.”
He added: “These anthrax spores can survive 300 years. If you were to dig them up the spores can get in the air and contaminate people. If they’re going to dig up this area and take the overburden to Teesside or somewhere they could transport the spores with them.”
We used to think that what goes in the ground stays in the ground.  Time to rethink that.
Posted by The Mound of Sound at 9:47 AM