Let's Be Honest - Canada Will Wind Up With the F-35, Largely by Default 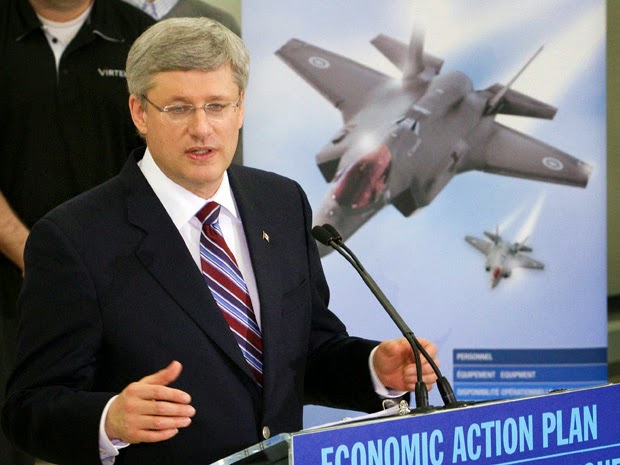 It may be the biggest military blunder in Canadian history but all signs point to our country succumbing to the F-35, Lockheed's first-strike, light attack bomber.  Harper, the ultimate stealth politician, is playing a waiting game.   He knows that the clock is running out on most potential F-35 rivals.  With the market dominated by cash-strapped buyers, costly aircraft production lines are shutting down in short order.

Boeing had modified 'stealth' prototypes of both the F-15 Eagle and the F-18 Super Hornet but without a lead customer both lines will probably be shut down and, once they're gone, they're gone for good.  It's reported that France's Dassault might close down Rafale production once the company's Indian order is completed.  The tranche 3 upgraded Eurofighter Typhoon may remain a possible contender but Harper may be able to outwait them also.

Here's the thing.  Countries around the world are signing on to buy the F-35 - Israel, Korea, Japan, Norway, the Netherlands, Australia - all without any of them staging a fly-off against the F-35's rivals.  Every other contender is available to show its stuff in attack, strike, close air support, air superiority, reconnaissance, patrol and interception missions.  The only airplane that won't compete because it's years away from being ready to compete is the one winning the contracts, the F-35.  Now, if you don't think those orders are being swayed by factors other than the jet's ability  and performance then I do indeed have a bridge to sell you.

The F-35 is not even the best Lockheed can make.   As a follow-on to Lockheed's F-22 Raptor stealth fighter, the company engineered the F-35 to be the 22's poor cousin.  The F-35: 1) isn't nearly as stealthy; 2) has  frontal aspect only stealth; 3) is slower; 4) lacks supercruise capability; 5) carries less payload; 6) is not as agile; 7) lacks thrust vectoring; 8) has considerably less range and 9) lacks twin engine survivability.

So we're paying as much or perhaps more than the cost of the F-22 for an aircraft that has had most of what makes the F-22 great engineered out of it.  Most people would think that's a sucker deal.  It's sort of like paying for a Cadillac and when you reach the dealership you find the 8-cylinder engine has been swapped for a 6-cylinder, the driver's door is missing, the back seat has been stripped out, the sunroof glass is gone and so is one of the wheels.  And we're handing over our money without even knowing if it'll manage to get off the lot and into traffic.

How many $billions are we forking out for them?

The thing is, Hugh, not even Lockheed can say for certain. The testing still has a long way to go and customers, including the Americans, keep cutting back on orders which drives up the unit cost. You hear all sorts of prices and one that's bandied about quite a lot is the cost for the airframe - without the engine!

Don't forget, the F-35 is already pretty long in the tooth. The development contract dates back to 1996. Lockheed got the nod in 2001. The airplane now isn't scheduled to complete testing until 2019.

The F-35 was designed to survive warplanes that were flying in 2001. It was not designed to confront an enemy flying its own stealth fighters in defence. To survive, the F-35 depends on BVR, beyond visual range, kills because in an infra-red missile or gun fight, it's toast. If the enemy has comparable stealth cloaking, your radar guided missiles may be ineffective, leaving the F-35 stuck in a furball.

I just wonder if brown envelopes have already changed hands in this deal?
As you know the F35 is a princess on the ground and a turkey in the air. Buying it would be like the opposite of the Avro Arrow. A plane already obsolete before its even in production,

BTW Mound your on fire today!

Steve, how do you think so many countries have inked orders for the F-35 without ever seeing what it can do and can't do in the air?

One of the big problems with Lockheed's stealth technology is a dismal sortie generation rate. No warplane is much use to you if it's stuck in a hangar for repair when you need it in the air.

That's a big factor in fly-off competitions. You get to put the contenders through their paces under heavy mission loads for several days. If you can get three missions a day out of one airplane and one mission every other day out of the competition, that speaks volumes.

It seems like these obvious questions are all going unanswered. I wonder what that means?

So in ten years, if the Americans, Canadians et al. are relying on F-35s, and the Russians, Chinese and any clients of theirs are working with their latest, somewhat more practical fighters . . . what are the implications for "Western" military dominance?
For that matter, if smaller powers have decent jets from a generation or two back, maybe hastily re-equipped with different radar, what are the implications for the US air force's ability to go completely unscathed in moderate sized conflicts like the invasion of Iraq?

I can actually see a silver lining here. The US will never stop stepping on countries until they find themselves unable to; lately their military procurement seems to be almost conspiring to move that date sooner.

Amazing how few really know the F-35. They just regurgitate what they read off countless blogs that have no idea what they're talking about or the press that will print anything negative regardless of the source just to sell a few more copies! "Read this the F-35 is going to be a highly successful fighter for the US and her Allies". So, in ten years time a lot of people are going to look like fools. Don't you be one of them.....

Few will really know the F-35 for several years to come. None of the buyers will get the chance to see how it flies against the competition which is what the head of the US Air Force F-35 programme openly calls "acquisition malpractice.

Maybe by 2019 the F-35 will magically develop a supercruise capability, the sine qua non of modern combat aircraft but not even Lockheed is suggesting it will. Maybe it will become, like its big brother, an all-aspect stealth design instead of merely frontal-aspect only (not very good in the old 'turn and burn'. Maybe, but it won't.

The plain fact that it can't climb, turn or run with the competition (no supercruise, remember); that once you sling fuel and ordinance on the wings it'll be that much worse; that it lacks range and, like its big brother, has a huge problem generating sorties like the competition (too much time in the shop); and that we're expecting to confront the new Cold War building in the Arctic and meet out NATO commitments, all with a minuscule force of 65-of the things means that you, Scot, simply can't take a joke.