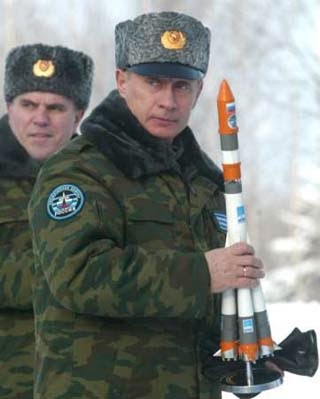 Vlad Putin is strutting about Crimea with a huge chip on his shoulder just waiting for some Ukrainian hot head to knock it off.  He's got bases surrounded, soldiers and their officers confined to their garrisons.  Russian forces pretty much have the run of the place.

It's sort of like Muhammad Ali's "rope a dope" - go passive, hunker down, wait for your opponent to wear himself out.  Or better yet, Mahatma Gandhi who led a resistance movement for the independence of India telling his followers that only through passive resistance could they defeat colonialism.

It's not likely that passive resistance alone will work with Vlad Putin.  Not entirely.  Time, though, isn't on Putin's side.  He's tried his A game and his B game and now he's left with Plan C.   With each passing hour, any violence Putin initiates is going to look increasingly like raw aggression.

Remember, this is the same Russia that only just got around to admitting its massacre of thousands of 22,000 Polish officers in the Katyn forest in 1943.   The parallels would be inescapable and, for Putin, probably unbearable.

Putin is still talking tough.  He's still boasting that he reserves the right to attack without further notice.  His boasts, however, are beginning to sound ever so slightly less assured.
Posted by The Mound of Sound at 8:21 AM

Mound, Crimea is under his control. What more he wants? There is not much West can do. In order to apply sanctions all EU countries have to agree.

I think it is U.S and West who are more in a pickle than Putin.

There's lots to make one think that the Crimea would choose Russia over the Ukraine if allowed. The preference for military to leave for Sevasopol speaks to their worry about the faction now in control and the support they have and the muscle they use from the far right neofascists.

The uber nationalism is now aimed at jews and probably Roma. There must be a lot of concern that ethnic Russians in eastern parts will be included in future.

The neo-Nazi element in Ukraine is troubling. I watched one being interviewed and he said Ukraine needs to be purged of Russians "and Jews" even as he said Ukrainian Nazis weren't like Hitler at all. Maybe they don't eat schnitzel.