Are the Republicans Becoming a Criminal Organization? 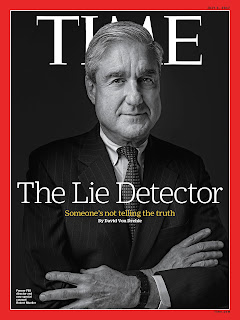 Donald Trump's ties to Russia are the subject of several investigations. One is underway in the Senate, another in the House of Representatives. The one that matters, however, is the criminal investigation by special counsel Robert Mueller and his team of crack prosecutors.

It's to be expected that Congressional Republicans, after loud proclamations of their sincerity and determination to "get to the bottom" of Trump et al and their Red pals would quietly change course and see that as little light as possible ever comes of their investigations. Fair enough, I suppose, that's politics. They don't want to bring any heat on Donald Trump. The Great Orange Bloat bites back and there are those mid-term primaries looming.

But what about Mueller's ongoing investigations that have already led to several criminal indictments and appear to be closing in on Trump himself?

One of Trump's vulnerabilities is on possible obstruction of justice. There's a load of stuff there starting with the firing of former FBI director, James Comey. Then it came out last week that Trump ordered the firing of Mueller last summer but his White House counsel refused the order, threatening to resign instead. Then, on the weekend, Bill Clinton's former impeachment nemesis, Ken Starr, opined that Trump could be charged with obstruction simply for lying about having ordered Mueller fired. That sounds like a bit of a stretch but, hey, Starr did run one of these impeachment things, right? And, never forget, that, when Congress moved to impeach Richard Nixon, the charge was obstruction of justice. Something about disappearing Oval Office tapes as I recall.

But what about those Congressional Republicans and their mid-term migraine, a.k.a. the Mango Mussolini himself? Lately, and especially over the past two weeks, they've gone beyond their own hapless investigations to begin meddling in Robert Mueller's bailiwick. They've been attacking the integrity of the FBI, claiming its out to lynch their president. They've been impugning Robert Mueller, a lifelong Republican, for including investigator/prosecutors with known or imagined Democrat leanings.

Now, Foreign Policy, reports that Trump and Congressional collaborators, took part in an effort to discredit three top FBI officials who might have corroborated James Comey's claim that he was fired because he refused to back off on the Trump/Russia investigation:

Trump — as well as his aides, surrogates, and some Republican members of Congress — has engaged in an unprecedented campaign to discredit specific senior bureau officials and the FBI as an institution.

The FBI officials Trump has targeted are Andrew McCabe, the current deputy FBI director and who was briefly acting FBI director after Comey’s firing; Jim Rybicki, Comey’s chief of staff and senior counselor; and James Baker, formerly the FBI’s general counsel. Those same three officials were first identified as possible corroborating witnesses for Comey in a June 7 article in Vox. Comey confirmed in congressional testimony the following day that he confided in the three men.

In the past, presidents have attacked special counsels and prosecutors who have investigated them, calling them partisan and unfair. But no previous president has attacked a long-standing American institution such as the FBI — or specific FBI agents and law enforcement officials.

Mueller has asked senior members of the administration questions in recent months indicating that prosecutors might consider Trump’s actions also to be an effort to intimidate government officials — in this case FBI officials — from testifying against him.

The New York Times reported late Thursday that Trump also ordered the firing of Mueller last June. Trump reportedly changed his mind after White House counsel Donald McGahn threatened to resign and two of the president’s highest-ranking aides told him that it would have devastating effects on his presidency.

That Trump may have been motivated to attack specific FBI officials because they were potential witnesses against him could demonstrate potential intent that would bolster an obstruction of justice case.

It's difficult to imagine someone as hard-nosed and experienced as Mueller shrugging this off whether the intimidation came from Trump, his attorney-general or faithful stooges in the House and Senate. This might be a fine teaching moment to remind congressmen not to meddle with criminal investigations.

NBC News reports that a favourite Trump target, FBI deputy director, Andrew McCabe, has stepped down.  Trump may come to regret getting what he wished for.