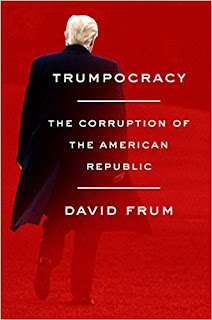 Even for the Mango Mussolini it's an unflattering depiction. Trump as a festering gum disease that, left untreated, will turn lethal. That however is how David Frum, one time speech writer for Bush 43, sees Trump in his new book, "Trumpocracy: The Corruption of the American Republic."

Frum appeared this morning on CBC's "The Current" with host Anna Maria Tremonti.

Frum writes that "the thing to fear from the Trump presidency is not the bold overthrow of the Constitution, but the stealthy paralysis of governance. Not the defiance of law, but an accumulating subversion of norms. Not the deployment of state power to intimidate dissidents, but the incitement of private violence to radicalize supporters."

"Trump is not strategic but he is brilliantly intuitive. He knows and he follows the course of least resistance. When Donald Trump was first elected a lot of alarmist people would compare what happened to Germany in the 1930s. And when I started this I was trying to explain: this is wrong. You don't take the most extreme case of democratic breakdown in the entire history of the world, with the most horrible consequences afterwards and say 'Right. It's going to be like that.' That's the outlier. There are a lot of stops on the trainline of bad before you get to Hitler station."

Frum says this slow undermining of democracy gives people in the government the sense that they still have time to stick up for American principles. He thinks otherwise.
"When the crisis comes, a lot of Republicans in the Senate say, 'look if Donald Trump tries to arrest anybody, I'll be there to stop it,'" says Frum. "We need you a long time before then. We need you to work on those gums and to notice things are just festering. Don't wait for the dramatic hour to be a hero. If it does come to that it will be too late."
...

"Trumpocracy is Donald Trump as a system of power," says Frum. "The whole system of the United States was supposedly designed to keep people like Donald Trump away from power and if they somehow slipped into power, control them while there. That system is failing. Trumpocracy is the mode of government that's grown up in the failure of the American system."

Frum also posits McConnell, Paul Ryan and congressional Republicans as a party of Quislings, Trump enablers, willing to succumb to Trump even at the cost of their party and their nation.
Posted by The Mound of Sound at 11:18 AM

Without treatment, syphilis can spread to the brain and nervous system or to the eye.

Symptoms of neurosyphilis include

Seems to me that Trump is the logical outcome of a system that attracts the worst people to run for public office, Mound. When you consider how venal and opportunistic American Senators and Representatives are, holding office to promote themselves and a few narrow interests instead of true democratic representation, Trump comes in like an untreatable disease and simply furthers the rot already there.

A addendum to Lorne's comment, Hound: Trump is the final solution for a society in which everything is for sale.


Lorne, I think we do it somewhat differently but it still comes down to elected officials placing their party's interests ahead of the public interest.


Transactional democracy, Owen, played a significant role during the final years and months of the Roman Empire. America was the big loser when Congress and the courts whittled away the McCain/Feingold bill for campaign finance reform.

That very Frum, a rabid neocon, slick manipulator, globalist, who had a hand in the dismantling of USA democracy (and thus in electing Trump) suddenly saw the light?
I do not buy it. Nor should you.


Remind me to begin taking advice from anonymice. They're so reliable.

I apologize for the H, Mound.

Great Post!
Thanks for sharing the useful information.
Get the best treatment and medication from the Best Dentist in India at an affordable price. You can just come to Ludhiana dental centre and consult with Dr Bikramjit Singh Dhillon about your problem.