Carving Out a Post-Globalism World 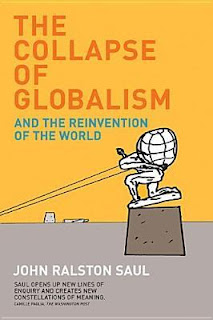 Even though our government may still embrace it, globalism is a failed concept and those who cling to it are inviting some pretty nasty consequences. The consensus about globalism is extensive and broad. It spans leftist economists such as Yanis Varoufakis, intellectuals such as John Ralston Saul, more mainstream economists such as Nouriel Roubini, Thomas Piketty and Joe Stiglitz, and even conservative stalwarts such as the International Monetary Fund and the World Bank, and so many more.

Globalization and its companion political ideology, neoliberalism, are crap. They have failed and that's not going to change.  Our federal government is flogging a thoroughly dead horse.

Fortunately there are options for a new political-economic regime to replace globalism although there are none on the horizon in Canada and no reason to hope there will be any time soon either.

There's a grave risk of not addressing the failure of globalization. It often manifests in authoritarian populism and the decline of liberal democracy across Asia, Europe, even the United States. Could it happen here? Absolutely because, absent progressive vision leading to reform, extremist populism is the default option.

It's a conversation they're now having in Britain thanks, in part, to Jeremy Corbyn and the new Labour Party. Arguments for reform and how to go about it are being heard in the UK. Here are some examples from today's Guardian.

George Monbiot has a piece exposing the sham of what in Canada are called PPPs or public-private partnerships of the sort Trudeau champions to meet Canada's massive infrastructure challenge.

PFI [privately financed initiative] projects, Blair and Brown promised, would go ahead only if they proved to be cheaper than the “public sector comparator”.

But at the same time, the government told public bodies that state money was not an option: if they wanted new facilities, they would have to use the private finance initiative. In the words of the then health secretary, Alan Milburn: “It’s PFI or bust”. So, if you wanted a new hospital or bridge or classroom or army barracks, you had to demonstrate that PFI offered the best value for money. Otherwise, there would be no project. Public bodies immediately discovered a way to make the numbers add up: risk transfer.


... A study published in the British Medical Journal revealed that, before the risk was costed, every hospital scheme it investigated would have been built much more cheaply with public funds. But once the notional financial risks had been added, building them through PFI came out cheaper in every case, although sometimes by less than 0.1%.

Not only was this exercise (as some prominent civil servants warned) bogus, but the entire concept is negated by the fact that if collapse occurs, the risk ripples through the private sector and into the public. Companies like Carillion might not be too big to fail, but the services they deliver are. You cannot, in a nominal democracy, suddenly close a public hospital, let a bridge collapse, or fail to deliver school meals.

Partly for this reason, and partly because of the inordinate political power of corporations and the people who run them, governments seek to insulate these companies from the very risks they claim to have transferred to them.

Monbiot points out that when a PPP venture fails, the loss usually defaults to the government anyway. The risk factor is a scam.

A separate article explores the PPP scam in the context of the recent failure of Carillion which is expected to dump hundreds of millions of dollars of losses on our government also.

The collapse of Carillion, embarrassing for a government that had championed the company and awarded it contract after contract, represents another significant blow to the “private knows best” economic dogma.

Nothing has come to symbolise the worship of free-market solutions – often against all the evidence – more than the persistent belief that key public services would be better provided by profit-seeking companies. As the journalist Robert Peston put it, the collapse of Carillion represents the definitive end of a 25-year love affair with the private provision of public services.

Abi Wilkinson writes that government policy is forcing poor people into catastrophic debt.  Zero hour contracts, the gig economy, the trap of easy credit as a substitute for inadequate wage rates, job churn, all that stuff isn't unique to our side of the Atlantic.

Finally, John Harris asks "what happens when all the jobs dry up?" a look at the looming crisis of robotics and automation.  The writer exhorts the left to develop an answer.

Academics at Oxford University’s Martin School say that as automation gains pace, even work in retail – which is all many places currently have left – “is likely to vanish, as it has done in manufacturing, mining and agriculture”. The era of driverless transport will soon be here. Even for the labour market’s winners, a digitised economy’s quickfire cycles and ever-changing demands are steadily killing job security.

So what might the progressive politics of the 2020s and 2030s look like? Clearly, our most glaring inequalities call for action that only a powerful central state can carry out. We should start, at long last, to move tax policy towards concentrations of wealth and assets, not least land and property. The line should be redrawn between what ought to be considered public services and utilities, and things best left to the private sector, a point underlined by the nightmarish collapse of the outsourcing giant Carillion. Investment needs to be forcibly pushed into places long deprived of it.
...

Because work and so-called welfare increasingly fail to provide any kind of secure foundation for living, one basic principle should sit at the core of the left’s vision of the future: that of a universal basic income (UBI). Thanks to the shadow chancellor, John McDonnell, there is a rather quiet Labour “working group” apparently looking into this, with a view to reporting around the time of the next election, and chatter about UBI periodically flares up at party gatherings.

James Galbraith addresses this potentially calamitous threat in his book, "The Predator State." Here, here and here.  Like Varoufakis, Galbraith contends that  robotics will demand a very real form of wealth redistribution failing which society will collapse.

Abi Wilkinson writes that government policy is forcing poor people into catastrophic debt. Zero hour contracts, the gig economy, the trap of easy credit as a substitute for inadequate wage rates, job churn, all that stuff isn't unique to one side of the Atlantic.

Just turn your radio dial to CKNW; a radio station propped up by money lenders advertising and seven year car payments not to mention don't worry about your credit rating and don't make payments for twelve months!!

There are many, many warnings of financial collapse.
Who will pick up the tab next time?

Finally, John Harris asks "what happens when all the jobs dry up?" a look at the looming crisis of robotics and automation. The writer exhorts the left to develop an answer.

There is no answer that will be palatable to the masses.
There are no answers that will satisfy the working and more importantly the non working classes.
Just where will our energies go when ( if we are aware) we are stripped of the human instinct to work and provide?

I find it amazing, and terrifying, just how quickly the scenario approaches!


In response to both comments, TB, our governments need to be planning and preparing for this overdue shift now. Yet, when vision is required, they routinely prove to be slackers. Why not? We vote them into power anyway, ne c'est pas?

Yes, it is worrisome but only if you're willing to peek under the carpet. That's not a very popular pastime these days.

How many credit collapses have we had in modern history?
How many times has the taxpayer bailed out the perpetrators?
Just when, if ever, will the taxpayer turn on those that profit from the situation?
My guess is that my neighbour with the seven year car payment will do anything to keep his car even as thousands suffer .
We really need to educate the masses.

The Universal Basic Income is an idea whose time has come.

Make sure you have some land paid for with a seller. A south facing small dwelling made from stone, and as gun!