So It's On. The Trans Pacific Partnership, Sans Trumpland, Is a Done Deal. 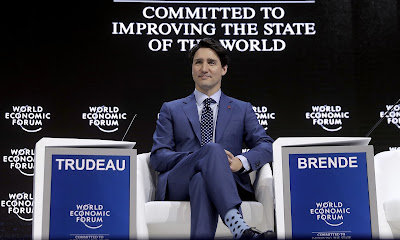 The ceremonies are scheduled for March but we're told the TPP is now a done deal even without the United States. The nagging question is just what's in it.

Canada, we're told, held out for certain environmental and labour concessions that, we're told, will cure the worst excesses of most earlier free trade deals. So we're told. Then again this government has told us plenty of things that haven't turned out to be quite true.

I'm of two minds on this deal. I would like to see more trade with Europe and Asia to reduce our dependency on an increasingly unreliable and pugnacious America. On the other hand these deals inevitably impact our national sovereignty, some more than others, and it rarely seems that we get good value for what we give up. Oh, it's plenty good for a select group but not necessarily for the nation and the Canadian public at large.

Meanwhile, our sometimes not-to-be-trusted prime minister, is in Davos, Switzerland, banging on the free trade drum.

According to The Guardian, Trudeau said that businesses and governments are failing to help their workers and citizens in "today's rapidly changing world." I'm not sure whether the "job churn" government thinks that's a bad thing or a good thing. There is so much Trudeau could do to rectify this disgraceful state of affairs if he was so inclined but I've not seen much sign of it, have you?
Posted by The Mound of Sound at 11:56 AM

Goods are shipped around the world on tankers, freighters, trucks, planes and trains, all of which emit GHG's.

And there's the issue of ISDS, which appears to be in all trade deals. ISDS allows corporations to sue governments, but not vice versa.

The TPP has been controversial in Australia owing to concerns about the investor state dispute settlement clause and because it lowers the requirement to test the local labour market before allowing skilled migrants from member nations.

[Australia’s trade minister Steve] Ciobo dismissed both concerns as part of a “scare campaign” against the deal. He said it was “absolutely not” the case that the TPP would give the government less ability to regulate corporations and the deal would not result in “an invasion of unskilled or unqualified foreign workers”.

The article doesn't mention whether either man's nose returned to its normal length after those statements.

Frum seems to have an epiphany of sorts.
Certainly second thoughts about Bush.
Or perhaps he wishes to be on the right side of history.

At the end of the day Tremonte is a friggin brilliant journalist; should be more like her.

What do you think of this?

"In 2012 the Harper government surrendered a good chunk of Canadian sovereignty by passing into law the notorious Canada-China Foreign Investment Promotion and Protection Agreement. The treaty awards Chinese firms special status protected by a secret arbitration process. By buying Aecon, CCCC, one of the world’s largest construction companies, automatically acquires rights that Canadian firms don’t have as well as preferential treatment under the trade agreement (deal not finalized).

Four years ago, Gus Van Harten, one of Canada’s leading experts on trade law and an Osgoode law professor, warned about the consequences of this trade deal for Canada and specifically for British Columbia. At the time he noted the treaty guaranteed “that any B.C. government or legislature or courts would now be subject to obligations arranged by the federal government and China under the treaty.”

In other words if the government of British Columbia decided to change the rules, say, on hydraulic fracturing of shale gas to protect water or reduce methane leaks, those changes could be contested by Chinese investors as unfair and as a violation of their profit expectations."

"Are B.C. taxpayers about to pay a Chinese SOE to build a dam (Site C) so more Chinese SOEs can secure electrical subsidies for shale gas mining and LNG development in B.C.?"