One thing you have to say for Donald Trump. He manages to suck all the oxygen out of a room.

This post happens to be about oxygen and it isn't about Trump, not directly. It's a report that came out last week that, as these studies tend to do, is about to vanish down the memory hole. It's a horror story or it should be if we had our wits about us. We don't.

The report is about oxygen, specifically how it is disappearing from our oceans and creating dead zones.  The study finds that the number of these dead zones has quadrupled since 1950. These anoxic waters have expanded by millions of square miles in just our lifetimes.  But wait, there's more. Along our coasts these dead zones have increased ten times. Not four, ten.

"Oxygen is fundamental to life in the oceans," said Denise Breitburg, lead author and marine ecologist with the Smithsonian Environmental Research Center. She's part of the GO2NE (Global Ocean Oxygen Network), which was founded in 2016 to tackle this problem.

"The decline in ocean oxygen ranks among the most serious effects of human activities on Earth's environment."

While scientists have long been aware of these dead zones, this is the first review paper to take such a broad, global view of the issue. And the results aren't pretty.

As Earth's climate continues to warm, the team predicts that the oceans will continue to lose oxygen at a rapid pace.

And, as the paper in the journal Science points out: "Major extinction events in Earth's history have been associated with warm climates and oxygen-deficient oceans."

So what's causing these dead zones?

Climate change is a huge part of the problem, especially for the open ocean. Because warm water holds less oxygen, as surface water temperatures warm up, it makes it harder for oxygen to get down into the depths of the ocean.

Closer to shore, nutrient pollution - such as the runoff from agricultural practises - is also playing a big role.

Nutrients like phosphorous from fertiliser can easily end up in rivers and estuaries, which creates algal blooms that drain oxygen from the water as they die and decompose.

It's no surprise then that scientists are worried about the algae bloom the size of Mexico in the Arabian Sea.

Unfortunately, as the oceans get warmer, marine life actually needs more oxygen to survive, not less. The result is huge patches of bleached coral and dead marine life. 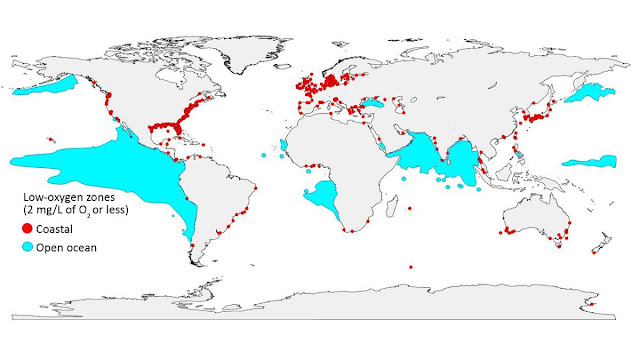 And what is our political response to this? Close to nil. The oceans, with their ability to suck vast quantities of heat and CO2 from the atmosphere and as the handy dumping ground for our waste, including agricultural chemical runoff, are a political "get out of jail free" card, for now.

Unfortunately, our oceans bat last. In recent decades prevailing wind patterns have caused the oceans to absorb enormous amounts of heat energy that has been carried into the depths. That's where the first law of thermodynamics comes into play, the one that tells us that energy can neither be created nor destroyed, just converted from one form into another. So all that heat carried into the depths of the ocean, well it's coming back up and it will be returned to the atmosphere.

Climate change is like a prize fight. It's not how you take a punch but how you absorb a flurry of punches. The ocean is absorbing what we're dealing out - the extra heat, the acidification, the chemical contamination - but we are not prepared for its counter-punching. You can be hundreds, thousands of miles from the ocean, drylanders in Toronto or Winnipeg or Calgary. It makes no difference. The ocean will reach you.

Paleontologist Peter Ward of the University of Washington in his book, "Under a Green Sky," has a one-paragraph description of what happens when absorbed CO2  crosses the oceanic tipping point:

First, the world warms over short intervals of time because of a sudden increase of carbon dioxide and methane... The warmer world affects the ocean circulation systems and disrupts the position of the conveyor currents. Bottom waters begin to have warm, low-oxygen water dumped into them. Warming continues, and the decrease of equator-to-pole temperature differences reduces ocean winds and surface currents to a near standstill. Mixing of oxygenated surface waters with the deeper, and volumetrically increasing, low-oxygen bottom waters decreases, causing ever-shallower water to change from oxygenated to anoxic. Finally, the bottom water is at depths were light can penetrate, the combination of low oxygen and light allows green sulfur bacteria to expand in numbers and fill the low-oxygen shallows. They live amid other bacteria that produce toxic amounts of hydrogen sulfide, and the flux of this gas into the atmosphere is as much as 2,000 times what it is today. The gas rises into the high atmosphere, where it breaks down the ozone layer, and the subsequent increase in ultraviolet radiation from the sun kills much of the photosynthetic green plant phytoplankton. On its way up into the sky, the hydrogen sulfide also kills some plant and animal life, and the combination of high heat and hydrogen sulfide creates a mass extinction on land. These are the greenhouse extinctions.

Well, Jeebus, if we knew that we would deal with it, wouldn't we? Surely we would never let that happen, not if we knew better. It's time for that godawful reality check. We do know. We know better. It's all good, old-fashioned, evidence based, tested and verified science. It's all there at the fingertips of every government on Earth. And no, we aren't going to deal with it. We are letting it happen. We are unleashing this fate on future generations.

Those Shellfish Are Talking to You. Can You Hear Them?

How Agri-Business is Poisoning our Lakes and Rivers

And So It Goes

We have no hope whatsoever as long as mainstream media lets celebrities suck all the oxygen out of the room. Trump would not be president if media had done its job properly.

Mound, what's that box on your site that says "please update your account to enable 3rd party hosting" there for? It links to http://canadianprogressives.ca/ and a post about some ski area. Did you put it there or die Canadian Progressives do it?

We have no hope whatsoever as long as mainstream media lets celebrities suck all the oxygen out of the room. Trump would not be president if media had done its job properly.

Mound, what's that box on your site that says "please update your account to enable 3rd party hosting" there for? It links to http://canadianprogressives.ca/ and a post about some ski area. Did you put it there or die Canadian Progressives do it?


Toby I don't have a clue what that thing is. I've simply chosen to ignore it, perhaps stupidly.

It may be coming from Photobucket. https://productforums.google.com/forum/#!topic/blogger/UbGagxy2Kbc

Sorry about sidetracking your thread. Back to the subject.

Increasingly, it becomes a valid question to ask, Mound: Does the human species even deserve to survive, given our heedless destruction of the world around us?

The Earth definitely has a fever, and we are the infecting agent.


It reminds me of an acquaintance who died a couple of years ago. He was a skilled computer tech, an avid skier, ski patrol, etc. He was also a chronic smoker. He probably weighed 95 pounds. At 50 he looked 75. He really ripped up his lungs.

This fellow would tour the island on his monster Kawasaki motorcycle every summer. It must have weighed close to 800 pounds. Every year he would stop by for a visit. We would sit in the back yard and he would have three bottles of beer with a half dozen cigarettes.

On his final visit the routine varied a bit. When I passed him the first beer he used the first swig to down two pills. When I asked what the pills were for he wasn't even slightly evasive. They were to open the passages in his lungs. He told me they made it easier for him to smoke while he drank beer.

I never saw him again but we did speak a few times by phone. He called when he was admitted to St. Paul's hospital in Vancouver for respiratory failure. Apparently the medicos gave him a proposal. If he quit smoking for six months he could go on a waiting list for a double lung transplant. He seemed eager to take this very last chance.

Within a couple of months he was smoking again and he said he knew that meant no 'slim chance' prospect of a transplant. Mutual friends then informed me that he had been admitted to hospice. About a week later he called to say goodbye. He said that he chose his fate of his own free will knowing it would bring him to this point. He didn't want to die. He just wanted to keep smoking even more.

As a society I think we're much like this fellow only far less honest with ourselves. He faced his end with some sort of integrity, perhaps dignity. We won't.

The people who are making the decisions are not giving the other seven billion much say in the matter and will be surprised when the pitchforks come out. Think of the many major revolutions such as the French one of 1789 when the royals and elite wondered what the fuss was about until their necks were sliced.

The world would sooner read Michael Wolff than George Monbiot!!

Just up the H2S to 7000 ppm. Two snorts later the virus is toast, along with just about everything else that once moved. Then mother earth can try again.

John A, thanks for the book reference. Not sure how I'll fit it in with the enormous backlog staring me in the face at the moment.


Hard to argue with that, Trail Blazer.


What you're describing, John B, is akin to an execution. Oh, we won't get off that easy.