Is He Dumb, Stupid or Is It Cultivated Ignorance? Robert Reich Thinks It's All That - and More. 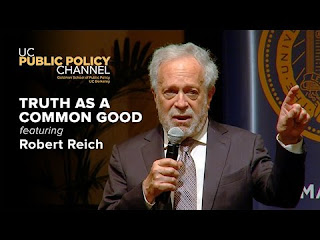 Robert Reich doesn't dispute that the 45th president of the United States is both stupid and ignorant. He's not as accomplished as he pretends. In fact, he would have done better clipping coupons.  Writing in TruthDig, Reich says Trump is really just an accomplished hustler, a con man.


He knows how to manipulate people. He has an uncanny ability to discover their emotional vulnerabilities – their fears, anxieties, prejudices, and darkest desires – and use them for his own purposes.

To put it another way, Trump is an extraordinarily talented conman.

He’s always been a conman. He conned hundreds of young people and their parents into paying to attend his near worthless Trump University. He conned banks into lending him more money even after he repeatedly failed to pay them. He conned contractors to work for them and then stiffed them.

Granted, during he hasn’t always been a great conman. Had he been, his cons would have paid off.

By his own account, in 1976, when Trump was starting his career, he was worth about $200 million, much of it from his father. Today he says he’s worth some $8 billion. If he’d just put the original $200 million into an index fund and reinvested the dividends, he’d be worth $12 billion today.

But he’s been a great political conman. He conned 62,979,879 Americans to vote for him in November 2016 by getting them to believe his lies about Mexicans, Muslims, African-Americans, Barack Obama, Hillary Clinton, and all the “wonderful,” “beautiful” things he’d do for the people who’d support him.

Not for nothing did I coin the term "Gullibillies" to refer to Trump's then loyal and still loyal supporters. In its colloquialism it may sound pejorative but it's really quite accurate. It's an expression that reflects the combined destructive power of ignorance and naivete. It implies a wholesale abandonment of critical thought in favour of faith- or belief-based thinking sometimes magical thinking. And it is proving to be almost unshakable among Trump's true believers.

Studies show that the Trump legion is the most likely to be harmed by the repeal of the Affordable Care Act, Obamacare. Likewise it is their children who'll be saddled with the 1.5 trillion dollar burden of tax breaks for the ultra-rich financed entirely on government borrowing. They're like the vivisectionist's dog lovingly licking the hand that wields the scalpel. It's stomach-churning to watch.

And he’s still conning most of them.

Political conning is Trump’s genius. It’s this genius – when combined with his utter stupidity in every other dimension of his being – that poses the greatest danger to America and the world.

.. the term 'genius' is currently in overdraft

Of course we know the late 'genius' Manson
who was invited, indeed celebrated
within the midst of the Hollywood upper crust
turned out to be a psychotic murderer..

El Trumpo Bankrupto has transcended 'scoundrel'
gone hypersonic past exalted grifter status
has now exited the atmosphere & will bypass earth orbit
Going where nobody has ever gone before
we will continue to gape at him.. astonished !
Hyperbolic bullshit deceit trajectory achieved !

Unfortunately, this twisted lifetime narcissist
has an even bigger button than Manson had
a larger 'base' so to speak..

Yet this delusional modern day Icarus.. will not fall to earth
but plunge instead directly into a mythic golden toilet
and unfortunately for him, he won't get to 'take it with him'

Reich is a neoliberal globalist and Dem partisan hack. One would have to be gullible to believe that Reich or any other career Dem has done a goddamn thing for Americans over the past 50 years.

Was Trump lying about Hillary being a bribe-taking criminal who destroyed evidence by deleting emails and smashing smartphones with a hammer? Or is Reich a con-man for defending the DNC bribe factory the Clintons created while he served in their administration?

Was Trump lying about there being 11 million illegals in the country? So many coming across the porous Mexican border Obama had to deport 2.5-million for violations over 8 years? Why do Dems want to tear down the Mexican border and flood the their inner-city ghettos and the American South with cheap labor? Because they represent American workers? Or because they support 'hemispheric open borders' for bribes?

Is Trump a "racist" for wanting to prevent a flood of Muslim refugees from wreaking havoc in America like they are doing across Europe? Trump's position is to ban them. The Dem position is to arm the terrorists and bomb Muslim civilians to create more Muslim refugees and jihadists to unleash on Western society. Ban or bomb? Who are the real racists? My bet is on the ones involved with crimes against humanity for kickbacks.

Trump stopped the Democrat TPP and is renegotiating the Democrat NAFTA scam. (Democrats and Liberals say they are the parties of free trade!) Trump is single-handedly turning the tide on the neoliberal globalization outsourcing bloodbath destroying the Western economy. (Junior wants the TPP and free trade with China.) Dems and Liberals continue to try to con workers into believing these free trade deals are good for them!

Is Trump a con-man for pointing out Obama betrayed Americans on healthcare reform? How Obama promised the Public Option – which would've covered all – but instead brought in a neocon turd that only covered 20 of 50 million uninsured and caused premiums to explode? Trump tells Congress to Repeal and Replace with better. Bribe-taking Dems ham it up over a turd because they prefer the status quo.

Trump is delivering on his promises to his base like no president in decades, whether or not you agree with his promises. Dem leaders have consistently betrayed their base for upper-crust payola since JFK. 50 years of no progress and some gullible people are still falling for the same old lines!

Time to change the channel!


Anonymouse = irrelevant, by definition. Are you, by chance, a Christian fundamentalist or just another deviant who supports a serial sex offender?

You can go on about Hillary when she's (a) charged with something and (b) convicted of those charges. Until then you're just that grubby money-launderer's stooge.

Democrat NAFTA? Hayek, Friedman, Thatcher and Reagan, not a Democrat/Liberal among them. So, please, get your facts at least a little right.

Obama betrayed Americans on health care? No, chump, it was Congress, bought and paid for Congress, including a number of Democrats and all the Republicans who ensured that universal healthcare went nowhere. Yet it was Trump, on the campaign trail, who promised universal care and then went along as Congress gutted the package to free up money for tax breaks for the very rich. That way "the people" could be screwed on both healthcare and taxes.

Trump has only "delivered" in your deeply contorted mind. That's why his approval ratings are at an all-time high. Oh, sorry, they're actually the lowest in recorded presidential history. No one before Trump even comes close, not even Nixon during Watergate.

Time for you to change blogs. I think you would do much better where people are more indulgent to your crapspiel.