Why Is Canada the Country Insisting It Be Kept Intact? Just Who Is Our Government Protecting? 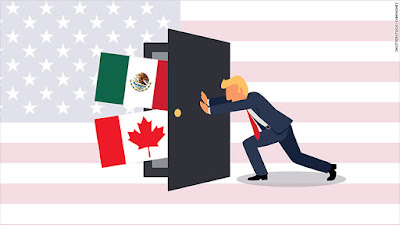 One of the truly perplexing aspects of the North American Free Trade Act, NAFTA, is the Ch. 11 investor dispute resolution section.

Trump wants it gone. Mexico doesn't seem to care. Canada insists it be retained. We want it. Why?

Canada gets sued by foreign companies under the ISDS provision more than the United States and Mexico combined. We get soaked.

Canada has been the target of more claims under Chapter 11 than its Mexican and American partners and the trend is getting worse as Canada has been sued over twice as many times as Mexico and the U.S. combined since 2010.

Canada is also far more likely to lose challenges — the CCPA says Canada has won nine and lost eight concluded cases so far while Mexico has won seven and lost five and the U.S. has won all 11 of its concluded cases.

"This is the irony to it. Canada is No. 1 in the world of developed countries that has lost under investor-state," she said.

"Canada's paid out a ridiculous amount of money... Of any country Canada should say, 'That's it. I've had it with investor-state."'

So, if the Canadian people are getting hammered by the ISDS in NAFTA and yet the Trudeau government is insistent that it be retained, somebody must be benefiting. If would be nice if our government would tell us just who it's working for.
Posted by The Mound of Sound at 1:39 PM

IDS really sticks in the craw of many people on both sides of the border, and I agree with you generally about Canada's position on retaining it: it serves no good purpose and actually harms the cause of free trade. But I can think of some tactical reasons for Canada's negotiating stance:
1) It's a sort of virtue signaling towards global investment crowd (which minister Freeland has been suffused in for decades).
2) It's being retained for the express purpose of being given up later during the negotiations.


You could be right, Chris, about tactical purposes. It just seems so counter-intuitive.

In a branch-plant economy, the ISDS clause is an excellent excuse for government inaction. The possibility of being sued by US companies affected by new or tighter regulation is trotted out whenever pressure builds for change. It's likely what prevents the current government from restoring the protections over rivers and lakes that were killed by the Harper government at the behest of the oil companies.

If the Libs wanted to reverse tbe harm Harper did, they'd get rid of ISDS. If they keep it, it's an obvious sign that they're more interested in pleasing the oil and pipeline companies while being able to shunt the blame onto the Cons.

The question of Chapter 11 is one I have often asked myself, Mound, and the only conclusion I have been able to come to is that it is the perfect symbol of the neoliberal government that Trudeau heads. While he likes to make sanctimonious statements about trade deal benefiting everyone, it seems clear to me that Trudeau is most concerned about protecting the multinationals, even at the expense of our coffers and sovereignty.

I think Govt is desperate for foreign investment. Govt might think that banning ISDS would limit that.

This is pathetic - it's as if we're a bunch of babies: we can't develop our own resources, we need foreign companies to develop them for us.

Also, Govt is desperate to grow the gdp, that's one way they deal with the ever-growing debt.


Lorne, I'm not confident that Trudeau is formulating the policy that underlies his actions. He lacks the education, the years of experience and the street smarts that are often the stock in trade of genuine leaders. No offence intended but he was a grade school teacher and that for just a handful of years. No, I believe the policies he espouses are the work of his aides, people who might be ungraciously referred to as "handlers." For a fellow who presents himself as a man of the future, ready to tackle the troubles of the world, his words never seem to be well reflected in his deeds. Perhaps it's enough for Canadians that the world seems fond enough of the Dauphin.


@ Hugh. Yes, Trudeau has on several occasions vowed that his primary mission is to grow Canada's GDP. That places him inherently in opposition to policies that might be advantageous to the Canadian rank and file.