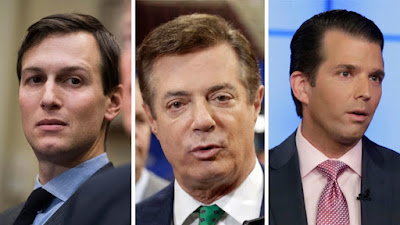 Every despot has a Rasputin and Donald Trump's is named Steve Bannon.  The ousted chief political adviser has now turned on Trump's namesake, Don Jr., accusing the son, who is sometimes referred to as "Fredo," of treason.


Donald Trump’s former chief strategist Steve Bannon has described the Trump Tower meeting between the president’s son and a group of Russians during the 2016 election campaign as “treasonous” and “unpatriotic”, according to an explosive new book seen by the Guardian.

Bannon, speaking to author Michael Wolff, warned that the investigation into alleged collusion with the Kremlin will focus on money laundering and predicted: “They’re going to crack Don Junior like an egg on national TV.”

Fire and Fury: Inside the Trump White House, reportedly based on more than 200 interviews with the president, his inner circle and players in and around the administration, is one of the most eagerly awaited political books of the year. In it, Wolff lifts the lid on a White House lurching from crisis to crisis amid internecine warfare, with even some of Trump’s closest allies expressing contempt for him.

Bannon, who was chief executive of the Trump campaign in its final three months, then White House chief strategist for seven months before returning to the rightwing Breitbart News, is a central figure in the nasty, cutthroat drama, quoted extensively, often in salty language.
...

“Even if you thought that this was not treasonous, or unpatriotic, or bad shit, and I happen to think it’s all of that, you should have called the FBI immediately.”

Bannon went on, Wolff writes, to say that if any such meeting had to take place, it should have been set up “in a Holiday Inn in Manchester, New Hampshire, with your lawyers who meet with these people”. Any information, he said, could then be “dump[ed] … down to Breitbart or something like that, or maybe some other more legitimate publication”.

Bannon added: “You never see it, you never know it, because you don’t need to … But that’s the brain trust that they had.”
...

Bannon has criticised Trump’s decision to fire Comey. In Wolff’s book, obtained by the Guardian ahead of publication from a bookseller in New England, he suggests White House hopes for a quick end to the Mueller investigation are gravely misplaced.

“You realise where this is going,” he is quoted as saying. “This is all about money laundering. Mueller chose [senior prosecutor Andrew] Weissmann first and he is a money-laundering guy. Their path to fucking Trump goes right through Paul Manafort, Don Jr and Jared Kushner … It’s as plain as a hair on your face.”

Last month it was reported that federal prosecutors had subpoenaed records from Deutsche Bank, the German financial institution that has lent hundreds of millions of dollars to the Kushner property empire. Bannon continues: “It goes through Deutsche Bank and all the Kushner shit. The Kushner shit is greasy. They’re going to go right through that. They’re going to roll those two guys up and say play me or trade me.”

The fallout from this should be fascinating. Team Trump has gone to great lengths to keep a lot of this stuff in house, out of the public eye. Trump's massive ego and his volatile temper may have difficulty with Bannon's remarks and criticisms. This is, after all, the same Steve Bannon instrumental in the Roy Moore fiasco in Alabama when Trump had already endorsed Moore's Republican rival, Luther Strange. That insubordination cost the Republicans a badly needed Senate seat.

This may also make it far more difficult for Trump to fire special counsel, Robert Mueller, now that Bannon has virtually pronounced Kushner, Don Jr. and Paul Manafort guilty of serious crimes including, apparently, money laundering and a path straight to "fucking Trump" himself. It almost seems that this is Bannon's Night of the Long Knives, White House-style.