Damn you, Tsunami. Could you not have ruffled my feathers at a more convenient time? I was so comfortably asleep.

I rolled over, got my Amazon Echo news brief from CBC and, sure enough, a tsunami alert. Maybe it wasn't such a great idea to cut the cable.

Plenty of reports on the internet - CBC, etc. Evacuation warnings. When I opened Blogger even it has a red warning bar.  Jeebus, what's with that?

We're pretty smug about these things on this side of the island. Tsunamis are for the west coast - Tofino, Uclulet, Port Alberni, supposedly. Unfortunately this map on CBC's web site isn't especially comforting. 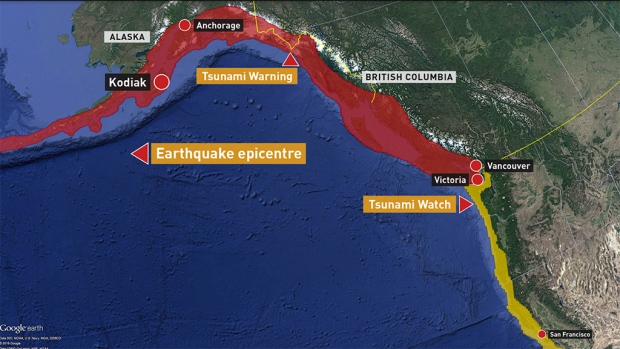 With any luck it'll turn out to be much ado about nothing. We've had tsunami warnings before but not like this. Besides, my house sits atop a 40-foot high escarpment. And I'm at least a block back from the water. That should do it, right?

Well that was a fine night's sleep utterly ruined. Tsunami watch cancelled. I figured if Haida Gwaii wasn't reporting anything by now we were home free. Seems that's the case.

Was the occasion for a very early morning visit from kids and grandkids for tea on higher ground, even though their house should be above the tsunami flood zone. Lots of joking around, recording our tsunami warning system and tweeting out to relatives in Ontario, grand daughter ensuring that all her friends are safe, and I'm all caffeined up, so will just stay at it. Seems all systems worked pretty much as they should. Sleep well.


I suppose I should know better but I'm unable to take the tsunami warnings seriously without a preliminary earthquake, the sort of thing we're told is in our future from the Cascadia subduction zone. Yet many still recall what befell Port Alberni from an Alaskan quake in the 60s.

Had it not been for that 2 a.m. call from the kids I would have slept through this just as I've slept through every other quake/tsunami warning for the past 15 years at least.

Our village was evacuated. We live on high ground, so I didn't have to leave home. Husband, on the other hand, is on the VFD, so he was out helping with the evac. Pager went off shortly after 2am. We finally got back to bed shortly after 5. Life on the west coast of VI :)

From what I can tell; the residents of Tofino gathered at a point still floodable by a tsunami.
They could have, should have , gone to Radar hill or some other high ground but they did not.
At the end of the day it was a news blitz to promote news!!
I am tired of overdone weather forecasts scare mongering and the like.
One day there will be a 'big one' and we will have all become so jaded by the alarmist, sensationalist news media we will sit out a disaster until the water is around our waist or necks!!
Add to this the stupid ,new, residents of Tofino happily develop large amounts of land in clearly marked tsunami areas .
Stupid is as stupid does.
Residents of this area will no doubt having been hit by a disaster will no doubt look to other taxpayers for bailouts and recompense..