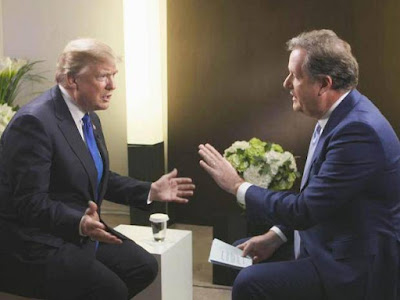 Donald Trump is a "stable genius." He must be, he said so. That's what he told another bloated ego, Piers Morgan, during a recent interview in Davos, Switzerland.

Trump also let drop that America might return to the Paris climate change agreement. Why? Because he's got a thing for French president, Emmanuel Macron.

Does Trump believe in climate change? No, hell no. Does he believe that it's time to switch to alternative energy instead of fossil fuels. Ditto, hell no. Does he want to slash American greenhouse gas emissions? Couldn't care less. But then there's Emmanuel, swoon.

Only a true genius, and a very, very stable one at that, could square that circle.
Posted by The Mound of Sound at 9:47 AM