For several years the United States and Russia have been in a nuclear arms race, each side racing to develop new warheads and ever better delivery systems.

Now the world's largest economy, China, has joined the race.

China must strengthen its nuclear deterrence and counter-strike capabilities to keep pace with the developing nuclear strategies of the United States and Russia, the official paper of the People's Liberation Army (PLA) said on Tuesday.

U.S. President Donald Trump's administration may be pursuing the development of new nuclear weaponry and could explicitly leave open the possibility of nuclear retaliation for major non-nuclear attacks, according to a draft of a pending Nuclear Posture Review leaked by the Huffington Post.

This "unprecedented" move by the United States, combined with continuous quality improvements of nuclear arsenals in both the U.S. and Russia, means that both countries place greater importance on deterrence and real combat usability, the commentary in the PLA Daily said.

"In the roiling unpredictability of today's world, to upgrade the capability of our country's deterrence strategy, to support our great power position... we must strengthen the reliability and trustworthiness of our nuclear deterrence and nuclear counterstrike capabilities," it said. 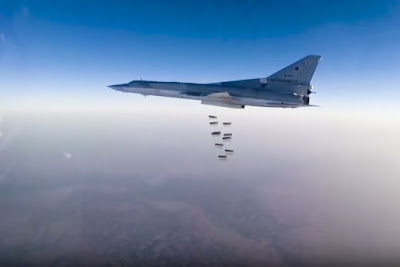 Meanwhile, its engagement in the Syrian/ISIS conflict enabled Russia to gain experience with 215 new weapons systems.  Nothing like a little live fire to let you discover what works and what needs fixing.

“The rout of the well-equipped terrorist groups in Syria demonstrated the power of our Army and Navy, and the course of the operation demonstrated the tradition of reliability and effectiveness of Russian weapons,” Putin said in aspeech.

Putin noted that Russian forces used some 215 new types of advanced weapons systems in Syria. Moreover, the Kremlin demonstrated its new long-range precision guided conventional strike capability under operational conditions in Syria–less a necessity in fighting insurgents in the Middle East than a shot across NATO’s bow.

“The first experience of the combat use of long-range air- and sea-based systems proved to be positive,” Putin said. “These were primarily the Kalibr missile and the X-101 missiles that are less known to the public. Strategic aircraft were also used in combat conditions for the first time.”
Posted by The Mound of Sound at 11:54 AM

We are reliving the 1950's, Mound. But no one is making anyone great. The chance for a miscalculation continues to rise.

I think there was a bigger chance of miscalculation in the 1950s, Owen. I can't imagine Allen Dulles (CIA director) inviting Ivan Serov (KGB chairman) over for chin wag. But that's exactly what Mike Pompeo did recently with Sergey Naryshkin.

Lowering tensions between Washington and Moscow is a good thing, even if one suspects improper motives for doing so.

In the early 1960's, Dr. William Brodie of Rand, ( he of Mutually Assured Destruction fame), came up with the theory of Minimally Assured Destruction. Based on early studies of nuclear fallout and irradiation patterns, Nuclear Winter theories, and fragility studies of modern integrated infrastructure, he theorized that as few as 75 20mt nuclear weapons landing on Russia, Western Europe, China or the US, would lead fairly quickly, ( a year or so), to those nations complete economic, military and political collapse.

Brodie's Minimally Assured Destruction Theory said that 150 nuclear weapons spread across the Trident, was enough to survive an Opponent's First Strike, and retaliate, strong enough to destroy the Opponent. If you possibly needed to counter two or more existing nuclear powers at the same time, 300 -350 was enough.

The only place where Brodie's Theory got any traction, was China. While the US and USSR built nuclear inventories of over 10,000 of all shapes and sizes, China built and inventory of 300-350, all Ballistic missile based single warheads, and took the trillions of dollars in spending, and invested it elsewhere.

In the 1980's, as China modernized, she embarked on building the second leg of the Trident, SSBN's, but even today, China lags far behind, to the point that Chinese SSBN's require staying close to China, relying on the Island Chain and other Chinese assets, ( air and naval) to survive long enough to counterstrike.

While China researched and developed better Ballistic missiles, MIRV warheads, better guidance systems, they only started to manufacture and deploy them, after US ABM developments, and deployments, made it a requirement to keep the Chinese Nuclear inventory viable.

And of course, China never did bother to develop and deploy the Third Leg of the Trident, the Nuclear Strike Aircraft.

So while there will be a "nuclear arms race" in the South China Sea,
China's gonna stick to Brodie's Minimally Assured Destruction, building better SSBM's and their missiles, keeping their inventory small, while the US wastes trillions.

I refuse to be sucked in to nuclear disaster outcomes.
Every state knows that mutual assured destruction is a fact.
Every state also knows that should they possess nuclear weapons they are unlikely to be attacked and invaded.
Modern warfare is much more likely to come from cyber attacks and drones.
Add to this misinformation attacks through the internet.
Other possibilities include this...
https://autonomousweapons.org/slaughterbots/

China's gonna stick to Brodie's Minimally Assured Destruction, building better SSBM's and their missiles, keeping their inventory small, while the US wastes trillions.

Was it not the USA that convinced the ,then, USSR to waste millions$$ on the fight for Afghanistan and hence their downfall?

Perhaps the role is being reversed and the USA is now funding it's military to the point of self destruction?