AfriCom Really Is AfriKom After All 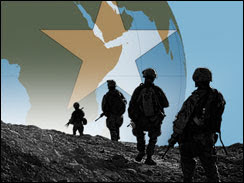 The US Army's newest overseas command, AfriCom, is getting a rough reception from most African leaders. In fact, only Liberia has offered to host American military installations on that continent.

When the Pentagon first began scouting for basing privileges in host nations, it assured them that AfriCom - make that AfriKom - would have a humanitarian, not a military focus. They expressly assured all and sundry they wouldn't be using AfriKom to hunt down Islamists in those lands.

What sharp teeth you have, Grandma!

The United Nations Office for Humanitarian Affairs, in a move destined to set the Pentagon and White House wolves howling, has come right out and said that AfriKom's focus is military, not humanitarian:

In a key briefing to Congress on 13 March, General William “Kip” Ward, head of the US Command for Africa, AFRICOM, devoted only 15 seconds of his four-and-a-half minute opening remarks to a possible humanitarian role.

Focusing instead on military training, security and counter-terrorism, his remarks came in sharp contrast to a year ago when officials announced that the command would concentrate on humanitarian assistance, alarming many aid agencies, which were concerned that US military involvement in humanitarian aid would undermine their neutrality.

Now that the US is relying on Africa for an increasing share of its imported oil and with the recent appearance of China in competition for African resources, the Dark Continent has come in for much more attention from Washington. Given what they've seen happen elsewhere in the world, that has a lot of African leaders openly questioning why they need, or would want, the US Army there anyway?
Posted by The Mound of Sound at 7:08 AM