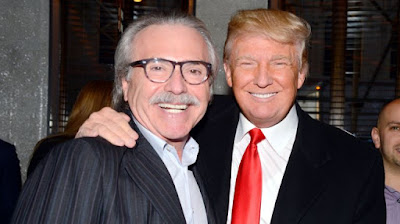 David Pecker may be Donald Trump's longtime pal but he's not about to risk jail for the Mango Mussolini.  Pecker and his company, AMI (National Enquirer), have cut a non-prosecution deal with Team Mueller, a development revealed shortly after Trump lawyer and fixer, Michael Cohen, was sentenced to three years for his own Trump sins.

National Enquirer publisher American Media Inc. agreed to accept responsibility for its role in a $150,000 payment to silence a former Playboy Playmate about her alleged affair with President Donald Trump before the election.

Under a non-prosecution agreement, the company admitted its purpose was to suppress the woman’s story and prevent it from influencing the election. According to the cooperation agreement with AMI, Trump’s longtime lawyer Michael Cohen and another campaign official met with AMI Chairman David Pecker about the scheme around August 2015. That official’s involvement has not been previously reported.

“As a part of the agreement, AMI admitted that it made the $150,000 payment in concert with a candidate’s presidential campaign, and in order to ensure that the woman did not publicize damaging allegations about the candidate before the 2016 presidential election,” the prosecutors wrote in a statement announcing the deal.

Prosecutors have still not revealed the identity of the Trump campaign aide who accompanied Michael Cohen to meet with David Pecker to discuss how AMI could help bury negative stories about Trump during the campaign. It's been rumored that two other women "sold" their stories to Pecker's National Enquirer.

Curious, isn't it, that Trump's litany of woes seem to fall into just two categories: his pecker and/or the Russians.
Posted by The Mound of Sound at 12:04 PM

Well, wasn't the pee hooker episode both a pecker and a Russian problem ?

yes indeed, Rumley, hence the use of "and/or"


I'm glad you liked it, Lorne, but I thought it was at the edge of tastelessness, sort of like Trump himself. Wonder what tomorrow's tweets will hold?

.. Cohen got 3 years.. I have yet to see the specific time per crime but expect that is detailed on numerous venues. What struck me though was it seems impossible to disconnent Cohen's actions - from on who's behalf & direction they were enacted, indeed proven ! Seemingly, Trump is complicit in 'conspiracy'.. or are we witnessing another 'immaculate' crime.. ? A conspiracy of one ? Astonishing !

Were I Canadian, I'd be more worried about the fact that travel to China has suddenly become VERY hazardous thanks to Trump's water carrier in the prime minister's office, who looks more in over his head than Macron, if that's possible. As for Trump--if they didn't impeach or prosecute Bush or Obama for war crimes and crimes against humanity, he won't be prosecuted over this relatively inconsequential nonsense.

.. at the risk of being repetitious.. nobody should not be surprised regarding Donald's limp wick foibles. And those not aware of his dull urges should reflect on the reality of that guy Weinstein.. the guy with a habit of using the closest potted plant for his ya yas and so on. Its now clear how disturbed that Weinstein coverup or should we say 'crisis management' extended.. but here come the tip of the Trump peckerdilloes (sic)

But Michael Lewis has calrured, indeed encompassed just how sloppy and uninformed the future president was, even after 'winning' the presidency. So why assume the parasitic loser would perform well with his fly open and shriveled wang dang noodle on display with high priced exotic undressers ? Trump is in no way whatsover 'normal'. There are vague shreds indicating he has some ability to retain facts.. but they are doctored during absorption into his own distorted reality. Hell, the constant tweeting and bleating of 'no collusion !' 'NOT FAIR !' 'Fake News !' eloquently reveals this

I look more and more at Trump as a grotesque malformed but large fat parasite. Robert Mueller was tasked with pinning the specimen down for examination. They might as well have dumped the Trump on an ice floe with a polar bear. Trump aligned himself with corrupt country club grifters including all of his family.. Mueller put together a platoon of hardened exemplars.

Trump was swingin his dick.. I guess because he could.. and perhaps in the final analysis, that's what Robert Mueller is going to grab him by.. Fair warning to all the bible thumpers who 'believe in Trump' - or 'all that winning' or 'Great Again' its going to be public spectacle.. no mercy rule for a historic pummelling... Giuliani in out of his depth.. this going to far exceed the Nixon Tapes.. Trump et al are either going to be shoved down the throat of America by Mueller.. or delivered as suppository ..