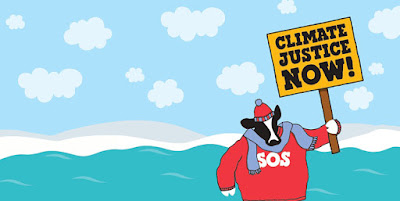 An old friend called yesterday. I think she wanted an annual update on our progress along the Road to Hell. We talked about the pandemic, the George Floyd uprisings, the decline of democracy, a lot of things.  Her son-in-law and daughter being police officers, she has taken on a pretty hard-nosed, "law and order" mindset. I knew there was no point getting into it with her so I changed the subject and we moved on.

She was very worried about climate change and what awaits her grandchildren. I gave her an update on recent scientific knowledge as I understand it. She said she wants to get involved but I'm not so sure that her health would even allow that sort of thing.

I told her that a number of years ago I had joined a group from England called Dark Mountain. Discussing it turned into an opportunity to recall what drew me to this collective in the first place.

Dark Mountain is a place for climate activists, climate advocates, writers and poets and anyone who wishes to follow them, no matter the distance. What sets Dark Mountain apart from most groups is that it is expressly for those "tired of the lies that society tells itself."

It is not burdened by fanciful ideas that we are going to win this thing. No, climate breakdown has gone too far. There's no political will to change that in time and no public appetite for the difficult changes that would require. Everyone wants it fixed, sure, but almost nobody will entertain the sacrifices that would necessitate.

There is no magic wand. We don't have the will to do what must be done.

Dark Mountain is about liberating us from myths, delusions and self-deception. It's not about giving up the fight, throwing in the towel. No, not at all. It's about not wasting time on foolish hopes and dreams. Once you're freed from the delusions climate breakdown and the job ahead is so much easier to handle.

Once you're liberated from the desperation it's easier to see what is still worth fighting for. When you reach that point you can see that what we do from here on in still matters. It still matters for my friend's grandkids. It matters for your own.

We can take one of just two paths. We can't salvage for those kids the Eden-like environment and privilege we enjoyed from the 60s through the 90s. No, they'll never know that. Yet, hard as their world will be 20, 30, 50 years from now, our footprint today will be on it. We will be felt.

We can either continue to indulge ourselves, maintain the status quo, and make their future commensurately more painful, more precarious than it need be or we can start to take another path to ensure they have the best future possible. We can harm them or we can maybe, just maybe, help them a bit.  If we stop squandering time with meaningless targets and empty promises, we might buy them some time that they can put to better use than we ever will.

And that's still worth fighting for.
Posted by The Mound of Sound at 12:28 PM

I will be looking Dark Mountain over.. My interests are very very diverse.. and my curiosity unquenchable .. but I run out of time & steam about 11 PMish.. and have usually fired up my engine by 4:30 AMish. Reading, Writing, Eating, Drinking, Biking, Walking, Photography, Music.. and its always fascinating on my iPhones to see what used the most battery power & screen use. Twitter by far and Bear (my go to writing app) but I must check Dark Mountain out.. and will today

I am also trying to tackle what preferably will be my last 're-invention' of myself. I have done this quite a number of times. Its just the term I use when I must find a new way to earn $$. It once overlapped with my 1st & only divorce... prior when I left University & education system behind, once when I left home, once when my pro sports ambitions stalled, once when I stopped driving very large objects on highways for pay, once when I was the best bartender in Canada, once when I looked throught the lens of an SLR (single lens reflex camera) and then when cel phones with cameras decimated freelance photography and once, recently when Covid-19 wiped out interior house painting. My writing career has stalled on the launchpad.. and my son suggests I start podcasting.

Stephen Harper Inc inspired me to embrace environmentalism.. so I'm now reviewing Ms Sarah Koinig's brilliant Serial - Year Three.. as that to me is a real benchmark to aim for. I aint getting better looking every day.. a la Joe Namath.. so senior modelling and acting not in my plans. I intend to parlay my 'vast life experience' into a useful commodity.. so perhaps CBC or NFB will embrace (pay) me.. as an uh.. Podcasting Reality Advisor on many matters ???


When you figure out the path to the future, Sal, do let me know. I had thought I would hang up my court gowns and return to dabbling in journalism, CBC radio if possible. Canadian journalism decided not to flourish but to yield to vulture capitalists who quickly set about to boarding up newsrooms from coast to coast to coast.

I have given podcasting some thought. Perhaps a weekly programme focused on interviewing my favourite climate scientists, military analysts and experts in other areas that interest me. I just don't have a clue how to go about it. I still remember the basics of editing and I can still do the Gordon Goodvoice thing. That's how I got the "Mound of Sound" moniker - from a bunch of articling students, the little shits who were apparently moved by my dulcet baritone. They also called me LEO which I discovered, through back channels, was an acronym for Large Evil One. That, I found oddly flattering.

.. haha.. might I suggest you listen to Season Three - Episode One - Serial
You'll find it familiar ground.. If you like it, migrate back to Season One or Two
Season Two involves THE MILITARY.. and its unique legal processes
Season One is set in Baltimore.. Ms Koinig is a gem..

My son is a crack video editor.. at a top drawer ad agency
been in edit suites since before he was born.. and at rock concerts too
I kid you not.. so I am discussing 'workflow' and tech with him

Also.. you have so many exemplars out there in BC
who would probably scoop you up in a heartbeat
We can go back channel like old Staff Sergeants prefer
or utilize your blog.. never a worry

I see podcasting as a fine guerrilla approach
and isn't that what Indy Blogging is ?
Hell.. anything 'written' can become 'voice'
and if you have the dulcet tone.. amen !

Its all just Marshall McLuhan's predictions unfolding..
He knew you were coming, hell, he saw you coming
He and I go back a long long way..
way back in the way before..
and I saw him once a week ..
close encounters, I kid you not

Pretty cool, Sal. Keep feeding me this podcast info. Much appreciated. I do have my past experience in broadcasting but that's way, way back. I'm talking back in the days when on our way back to the newsroom we had to drop off our 16mm film at Budge Crawley's lab for processing. In the year before I left for law school we actually got video tape. CBC called it ENG - electronic news gathering. They even produced a mediocre TV series by that name. I never did the cut and splice stuff but we always had to go into the editing suite to select the shots and wild sound we wanted to go with the script narration. Do you remember those three reel editing tables? Once the video cams came in you could edit and process the entire item in the van on the way back to the shop. Those vans had these extendable transmission masts that would send the item to the newsroom, especially if you weren't going to make it in time for the newscast.