Milley - That Walk With Trump Was Wrong 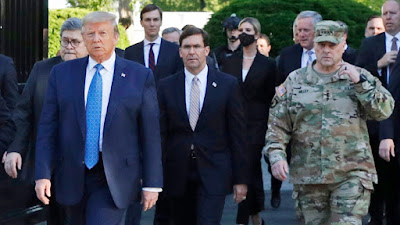 The chairman of the Joint Chiefs of Staff, general Mark Milley, says he was wrong to accompany Trump's entourage as the president staged a photo-op at a church across the street from the White House.

Gen Milley, chairman of the joint chiefs of staff, was speaking in a video for a National Defense University commencement ceremony.

He said: "I should not have been there. My presence in that moment and in that environment created a perception of the military involved in domestic politics.

"As a commissioned uniformed officer, it was a mistake that I have learned from, and I sincerely hope we all can learn from it."

The general was wearing battle uniform as he walked with the president and critics said this suggested his support for the deployment of the military against protesters.

And, general Mark, you need to figure out that fat, old guys really look silly in combat fatigues.
Posted by The Mound of Sound at 8:28 AM

According to the WaPo's timeline, Milley would normally have been in dress uniform for a visit to the WH. But he had changed into combats and was on his way to the Pentagon when he got the call to go directly to the WH. At least Milley's wearing a name tag and his uniform indicates his rank and branch of service - unlike the thugs Bill Barr had operating under his command that day.

I thought those were his pajamas .

Rumley, he might just have camo pyjamas and an overhead mobile of warplanes to boot.

Camouflage is a fashion statement.
Nowadays everything is camouflaged,clothing knives and forks( honest,at Canadian Tire)
It's a wonder we see anything at all!
So why did the the General wear something that is designed not to be see?
To be seen of course, and because in all likelihood Trump asked him to as a message to the populous.
I think the General fears the backlash and future career moves than he fears Trump; such is the disintegration of the short lived ( i hope)empire.

NPoV, I read about that. If Trump loses in November, Biden will have to work overtime to repair America's standing in the world. At this point that might not be possible.


TB, true story. When Cabelas opened their store in Nanaimo a few years ago, they had an interesting Christmas gift selection. One item was a pink, forest-pattern camo 'teddy' nightgown. I shook my head until, in another part of the store, I spotted a toilet plunger/shotgun. It looked like a shotgun with the plunger head at the end of the barrel. The worst part was that it made a firing noise whenever it was plunged. Apparently both the pink camo teddy and the shotgun toilet plunger were big hits.