Aunt Jemima Being Shown the Door. Uncle Ben May Be Next.


PepsiCo is removing the image of Aunt Jemima from its line of pancake mix and syrup. Fair enough. Racist overtones? Of course. When we were kids we didn't think of it that way but, yeah, it's there. Uncle Ben? Pretty much the same problem. Old black dude with balding white hair looks like he's straight off the plantation. It's time the Ben thing was ditched.

Neither of those images holds a candle to what I discovered when I moved to London in the late 60s. I was no stranger to Robertson marmalade but I had no idea about the firm's UK mascot, Golly. 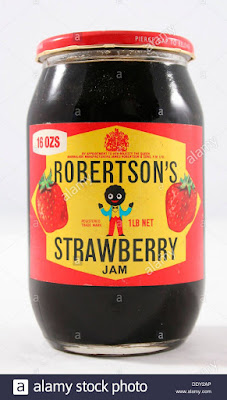 The Golly character, a black-faced minstrel doll with his natty red bow tie and trousers, flowing blue jacket and distinctive yellow waistcoat, danced his way across the label on pots for the best part of a century.

The company distributed Golliwog trinkets as promotional giveaways and most people I met admitted they had these toys as kids.  Yeah, right.

The Robertsons Golly was around when those it was aimed at were innocent of it's implications.
I well remember the , Look for the Golly, the Golly in the jar adverts.
In my area a black man was only seen on the Beeb's early discovery program's.

Much racial tension is a tool of greed and politics.
Left alone all humans would in a few generations be of mixed race.

Uncle Ben's and Mrs. Butterowrth's also on the way out.

Yes, TB. Another example of how messed up our societies can be.

As kids in England in the 1950s, we watched the Robertsons marmalade jar for signs of impending depletion at my father's hand, so we could be first to grab the Golly decal off the top of the jam on the next jar. Forget the label on the jar front, the sticky decal lying on top of the preserves under the lids themselves was where it was at.

Even The Noddy kids books had a golliwog in them. Systemic racism at its subtle finest. Comparable as to whether kids' violent comic books and then video games translates into adult behaviour. Can adults see reality or are they subtly changed without realizing it?

Export Robertsons jams didn't have the interior decal when we moved to Canada in 1959. But in Blighty itself, its continued omnipresence was much worse than statues of old dudes like Churchill who'd wasted natives all over Africa, the middle East and Injuh and found it entertaining sport as The Independent has re-revealed. Until 2001, when it finally dawned on the British white man that others found the Gollys (and statues) incredibly offensive. Peculiar thing is, my memory of the decals as a child was that I didn't associate them with real black people because they were so artificially unreal - that's not an excuse, it's an observation. Not how blacks saw them though, quite rightly so. And Justin hadn't got the message by 2001 either with his blackface antics.

OTOH, when we got to North America in '59 we just assumed Aunt Jemina was famous, and that's how she got featured on a box of dry pancake mix that produced lousy doughy pancakes. Pancakes are so easy to make we wondered why you needed a mix. The Aunt Jemima part went right over our heads, we merely assumed Americans as a nation had no clue about pancakes. Another form of discrimination and quite Canadian too, as we haughtily regard Americans as a lower order than we are. Very few Canadians are not guilty of that.

So here we are in Canada today with similar racist blind spots against First Nations and black, brown and yellow people incorporated in state-funded human form in the likes of Brenda Lucki and her force of pure as snow Mounties and police everywhere, virtually congenitally unable to see what a prime bunch of arseholes they appear to non-whites, and convinced they act in a fair manner. It's as fair as a Conservative telling some guy on EI he should get a job, when none are to be had as in this Covid-19 pandemic. Frickin blindingly stupidly dumb. But that's your harper/kenney attitude.

We have some long way to go. When you don't understand what it is that you don't understand, it takes centuries to make any headway at all. Quebec was so put down by the English, the reaction to that from the 1960s onwards has meant that they are determined NOT to understand, regarding themselves as the pinnacle of civilization where not even the English make the grade, let alone non-white immigrants. As I type this I see Jagmeet Singh has called out a PQ MP as racist with predictable results: he got ejected from the Commons. You can't say the truth out loud, that's not gentlemanly. Insane under the circumstances we currently face, but we'd rather pretend. Same with losing the UN Security Council seat - we support the mass beating down of indigenous peoples in Venezuela and Bolivia, and by our racist mining companies overseas, but talk around it with 99 other excuses that miss the point on purpose for home consumption. Chrystia Freeland is as racist as they come, in my personal opinion. Are we so blindingly dumb we cannot see the obvious? Yes. Now we know how the majority of the world sees us, but refuse to recognize the reason.

The whole thing is a full-blown mess worldwide. I see little chance of reconciliation anytime soon. It's a complete non-meeting of the minds.

.. I was really into the Jello hockey chips & hockey cards .. there wuz gum !
We made our own 'LikMAids' out of the Jello.. it was so-so .. in my view

I wuz going to be 'Johnny Bower' & Glenn Hall when I growed up..
the food time was irrelevant.. it was like a gas station 3 x daily
and a chance for the adults to have me by the ear
or discuss my Report Card.. signed by Mother Philip Nery ..
a Catholic witch .. legalized