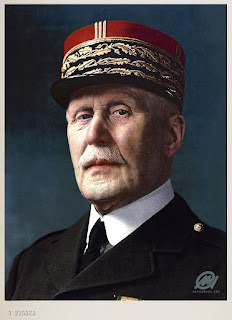 History doesn't really repeat but sometimes it does rhyme.

Anne Applebaum has penned a brilliant essay in The Atlantic exploring the history of those who abandoned their principles and chose, instead, to go along to get along. Then she focuses on how Congressional Republicans went Vichy for Donald Trump.

She contrasts how Lindsey Graham and Mitt Romney, both fierce opponents of Donald Trump at the outset chose different paths - Romney remained intensely critical of Trump while Graham turned into Trump's lap dog and ardent defender.


“Let me put it very plainly,” [Romney][ said in March 2016, in a speech criticizing Trump: “If we Republicans choose Donald Trump as our nominee, the prospects for a safe and prosperous future are greatly diminished.” Romney spoke of “the bullying, the greed, the showing off, the misogyny, the absurd third-grade theatrics.” He called Trump a “con man” and a “fraud.” Even after Trump won the nomination, Romney refused to endorse him. On his presidential ballot, Romney said, he wrote in his wife. Graham said he voted for the independent candidate Evan McMullin.

But Trump did become president, and so the two men’s convictions were put to the test.
It was Graham who made excuses for Trump’s abuse of power. It was Graham—a JAG Corps lawyer—who downplayed the evidence that the president had attempted to manipulate foreign courts and blackmail a foreign leader into launching a phony investigation into a political rival. It was Graham who abandoned his own stated support for bipartisanship and instead pushed for a hyperpartisan Senate Judiciary Committee investigation into former Vice President Joe Biden’s son. It was Graham who played golf with Trump, who made excuses for him on television, who supported the president even as he slowly destroyed the American alliances—with Europeans, with the Kurds—that Graham had defended all his life. By contrast, it was Romney who, in February, became the only Republican senator to break ranks with his colleagues, voting to impeach the president. “Corrupting an election to keep oneself in office,” he said, is “perhaps the most abusive and destructive violation of one’s oath of office that I can imagine.”

...To the american reader, references to Vichy France, East Germany, fascists, and Communists may seem over-the-top, even ludicrous. But dig a little deeper, and the analogy makes sense. The point is not to compare Trump to Hitler or Stalin; the point is to compare the experiences of high-ranking members of the American Republican Party, especially those who work most closely with the White House, to the experiences of Frenchmen in 1940, or of East Germans in 1945, or of Czesław Miłosz in 1947. These are experiences of people who are forced to accept an alien ideology or a set of values that are in sharp conflict with their own.

...The built-in vision of themselves as American patriots, or as competent administrators, or as loyal party members, also created a cognitive distortion that blinded many Republicans and Trump-administration officials to the precise nature of the president’s alternative value system. After all, the early incidents were so trivial. They overlooked the lie about the inauguration because it was silly. They ignored Trump’s appointment of the wealthiest Cabinet in history, and his decision to stuff his administration with former lobbyists, because that’s business as usual. They made excuses for Ivanka Trump’s use of a private email account, and for Jared Kushner’s conflicts of interest, because that’s just family stuff.

...Trump has governed according to a set of principles very different from those articulated by his original intellectual supporters. Although some of his speeches have continued to use that populist language, he has built a Cabinet and an administration that serve neither the public nor his voters but rather his own psychological needs and the interests of his own friends on Wall Street and in business and, of course, his own family. His tax cuts disproportionately benefited the wealthy, not the working class. His shallow economic boom, engineered to ensure his reelection, was made possible by a vast budget deficit, on a scale Republicans once claimed to abhor, an enormous burden for future generations. He worked to dismantle the existing health-care system without offering anything better, as he’d promised to do, so that the number of uninsured people rose. All the while he fanned and encouraged xenophobia and racism, both because he found them politically useful and because they are part of his personal worldview.

More important, he has governed in defiance—and in ignorance—of the American Constitution, notably declaring, well into his third year in office, that he had “total” authority over the states. His administration is not merely corrupt, it is also hostile to checks, balances, and the rule of law. He has built a proto-authoritarian personality cult, firing or sidelining officials who have contradicted him with facts and evidence—with tragic consequences for public health and the economy. The Change - In the wake of John McCain's funeral.

A year and a half into the Trump administration, it marked a turning point, the moment at which many Americans in public life began to adopt the strategies, tactics, and self-justifications that the inhabitants of occupied countries have used in the past—doing so even though the personal stakes were, relatively speaking, so low. Poles like Miłosz wound up in exile in the 1950s; dissidents in East Germany lost the right to work and study. In harsher regimes like that of Stalin’s Russia, public protest could lead to many years in a concentration camp; disobedient Wehrmacht officers were executed by slow strangulation.

...20 months into the Trump administration, senators and other serious-minded Republicans in public life who should have known better began to tell themselves stories that sound very much like those in Miłosz’s The Captive Mind. Some of these stories overlap with one another; some of them are just thin cloaks to cover self-interest. But all of them are familiar justifications of collaboration, recognizable from the past.

...If the Senate had removed the president by impeachment a month earlier; if the Cabinet had invoked the Twenty-Fifth Amendment as soon as Trump’s unfitness became clear; if the anonymous and off-the-record officials who knew of Trump’s incompetence had jointly warned the public; if they had not, instead, been so concerned about maintaining their proximity to power; if senators had not been scared of their donors; if Pence, Pompeo, and Barr had not believed that God had chosen them to play special roles in this “biblical moment”—if any of these things had gone differently, then thousands of deaths and a historic economic collapse might have been avoided.

...The price of collaboration in America has already turned out to be extraordinarily high. And yet, the movement down the slippery slope continues, just as it did in so many occupied countries in the past. First Trump’s enablers accepted lies about the inauguration; now they accept terrible tragedy and the loss of American leadership in the world. Worse could follow. Come November, will they tolerate—even abet—an assault on the electoral system: open efforts to prevent postal voting, to shut polling stations, to scare people away from voting? Will they countenance violence, as the president’s social-media fans incite demonstrators to launch physical attacks on state and city officials?

Each violation of our Constitution and our civic peace gets absorbed, rationalized, and accepted by people who once upon a time knew better. If, following what is almost certain to be one of the ugliest elections in American history, Trump wins a second term, these people may well accept even worse.

...In due course, historians will write the story of our era and draw lessons from it, just as we write the history of the 1930s, or of the 1940s. The Miłoszes and the Hoffmanns of the future will make their judgments with the clarity of hindsight. They will see, more clearly than we can, the path that led the U.S. into a historic loss of international influence, into economic catastrophe, into political chaos of a kind we haven’t experienced since the years leading up to the Civil War. Then maybe Graham—along with Pence, Pompeo, McConnell, and a whole host of lesser figures—will understand what he has enabled.

In the meantime, I leave anyone who has the bad luck to be in public life at this moment with a final thought from Władysław Bartoszewski, who was a member of the wartime Polish underground, a prisoner of both the Nazis and the Stalinists, and then, finally, the foreign minister in two Polish democratic governments. Late in his life—he lived to be 93—he summed up the philosophy that had guided him through all of these tumultuous political changes. It was not idealism that drove him, or big ideas, he said. It was this: Warto być przyzwoitym—“Just try to be decent.” Whether you were decent—that’s what will be remembered.