The Global Attack on Press Freedom 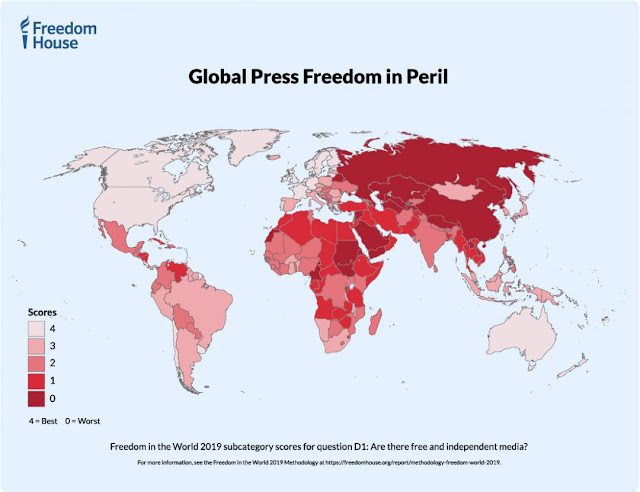 To Trump, they're the "enemy of the people." To Rodrigo Duterte, they're "sons of bitches" who are "not exempt from assassination."

A prominent Filipino journalist, Maria Ressa, has been convicted of libeling Duterte's friends and now faces up to six years imprisonment.


Maria Ressa has been accused of fraud, tax evasion and receiving money from the Central Intelligence Agency. She has been arrested twice and posted bail eight times.

She is also the Philippines’ most prominent journalist, a Fulbright scholar, a Time magazine Person of the Year for her crusading work against disinformation, and a constant thorn in the side of Rodrigo Duterte, her country’s authoritarian but widely popular president.

On Monday, after years of government threats and accusations, Ms. Ressa and a former colleague at the news site she founded, Rappler, were convicted of cyber libel by a court in Manila. Each was given an indeterminate sentence and could face up to six years in prison, and each was fined $8,000.

Rappler and other news organizations have doggedly covered Mr. Duterte’s war on drugs, which has left thousands of people dead and disappeared. The campaign’s brutality has drawn international rebuke.

“Today a court in the Philippines became complicit in a sinister action to silence a journalist for exposing corruption and abuse,” Ms. Clooney said in a statement. “This conviction is an affront to the rule of law, a stark warning to the press and a blow to democracy in the Philippines.”

Elsewhere in the League of Thugs.

Journalists in Brazil are under attack from Jair Bolsonaro and his supporters. Bolsonaro is even going after Glenn Greenwald.


In a shocking attack on press freedom, the Brazil’s rightwing government announced on Tuesday it was charging the journalist Glenn Greenwald with “cybercrimes” in relation to his reporting on the Bolsonaro administration and corruption within its ranks.

Over the past year, Greenwald and the Intercept Brasil, where he is a founding editor, have published a series of explosive stories based on leaked text messages that show Moro, who was a judge at the time, closely coordinating with prosecutors during high-profile corruption trials. Most notably, Moro presided over the trial that sent Bolsonaro’s main rival for the presidency, the former president Luiz Inácio Lula da Silva, to prison. After Bolsonaro was elected, Moro was quickly named justice minister.

It should be clear to anyone – no matter their political persuasion – that the Bolsonaro administration is taking these actions in a purely retaliatory manner in an attempt to criminalize journalism. Bolsonaro has been furious about the Intercept Brasil’s reporting for months, and the Intercept Brasil has published over 90 articles on the leaked chats and their aftermath.

Fearing attack from Bolsonaro's supporters, Brazilian media outlets are pulling their reporters from some government venues.


Verbal attacks on journalists have become a hallmark of Bolsonaro’s presidency, with Brazil’s Trump-admiring leader often egging on supporters outside his home.

Bolsonaro’s third son, Eduardo, who is the representative of Steve Bannon’s far-right The Movement in South America – regularly attacks what he calls the “extrema imprensa” (extreme press) .

On Monday, the president suggested Brazil’s overseas image was being damaged by a leftwing media conspiracy, after the British Daily Telegraph described him as “the man who broke Brazil” because of his handling of the Covid-19 crisis.

"Trump suffers a lot with this,” Bolsonaro said.

In Turkey, Recep Erdogan's attacks the media including reporters in other countries. At home he has referred to them as "terrorists."


It is difficult for journalists in Turkey to report about issues such as corruption or the government's conflict with Kurds, said Celal Baslangic of Arti TV, an independent broadcaster based in Germany. "What's most important is to resist war and campaign for peace. But, at the moment in that country, those who want peace are treated like terrorists," he said.

Aydin Engin, a longtime columnist at the daily newspaper Cumhuriyet, had a similar opinion. He said media had not been free since the 2017 constitutional referendum, which abolished the office of prime minister and concentrated power in the presidency rather than the parliament. There is hardly a free media outlet left and the atmosphere is stifling, he said.

In 2019, Reporters Without Borders ranked Turkey 157th in its World Press Freedom Index. "The witch-hunt waged by President Recep Tayyip Erdogan's government against its media critics has come to a head since an abortive coup in July 2016. After the elimination of dozens of media outlets and the acquisition of Turkey's biggest media group by a pro-government conglomerate, the authorities are tightening the vice on what little is left of pluralism — a handful of media outlets that are being harassed and marginalised. Turkey is the world's biggest jailer of professional journalists."

In Hungary, the Supreme Thug, Viktor Orban, used the Covid pandemic to pass sweeping laws that included a provision for media suppression. Speak out of line and you could wind up with five years in the slammer.


On April 30, Orbán’s Fidesz party, which already had a firm grip on many of the

country’s institutions, voted by a two-thirds majority to extend a national state of emergency over the pandemic, giving the government powers to bypass parliament and rule without checks and balances for an indefinite period.

The new law also criminalizes the spreading of misinformation deemed to undermine the authorities’ fight against the COVID-19 virus with fines and up to five years in prison. Orbán and Fidesz have frequently used accusations of “fake news” to attack critical journalists and have built up a vast pro-government media empire to blanket the country with official messaging.

These are by no means the only countries suppressing freedom of the press. The International Press Institute has a summary of how the pandemic is being used around the world as a pretext to muzzle press freedom.  It's really quite appalling.

These same countries tend to exhibit another tendency, the corruption or hobbling of their judicial systems, especially in the dismissal or forced retirement of independent judges.

A very troubling survey, Mound. I get the distinct sense these days that people hold journalism in little value, especially in the developed world. They seem to feel they should access information for free, and perhaps that is part of the problem. We tend not to value the things we don't pay for. And most governments have been reluctant to vigorously financially pursue the aggregators most profiting from the press, Google and Facebook, so as to support their homegrown journals.

None of this bodes well for the future of democracy, to state the obvious.