For 30+ years, prime minister after prime minister, has lied to Canadians, each setting bold targets for emissions cuts and then doing almost nothing to keep those promises. 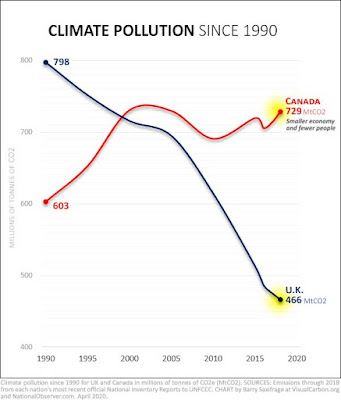 For 30 years the UK has been slashing their emissions.  The Brits are way down from their 1990 numbers. Canada, sadly, has gone in the other direction. So, what are the Brits doing that we're not? 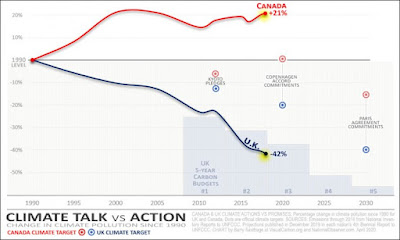 More than a decade ago, the U.K. passed a broad climate policy tool kit called the Climate Change Act 2008, also known as the "Carbon Budget" law. Here are four key things it does that Canada's climate policy still does not.

Key 1: It requires a plan

To start with, the law legally requires the U.K. government to create plans to meet all its climate targets. Hey, making a plan to reach your goal seems like an obvious thing to do, right?

But, while Canadian politicians regularly self-proclaim themselves to be climate leaders, the reality is that in 30 years of setting climate targets, Ottawa has never yet produced a plan to meet any of them.

A second critical benefit of the U.K. Carbon Budget law is that it requires government to act "at least 12 years in advance to allow policy-makers, businesses and individuals enough time to prepare."

Canadians would hugely benefit from having the luxury of such long lead times. As it is, we only have 10 years remaining to our 2030 climate target, and the neither the public nor the private sectors know what will be required of them. What we do know is that we have a still growing pile of emissions to cut, a rapidly deteriorating climate system increasing the urgency and a rapidly shrinking timeline in which to cut our pollution down to safe and sustainable levels.

To remove politics from the process as much as possible, the U.K. tool kit includes an independent Committee of Climate Change (CCC). As their website explains, "the CCC was set up to ensure emissions targets are set based on expert independent assessment of the evidence and to monitor the U.K.’s progress toward meeting the targets." The committee does the heavy lifting and then brings proposals for carbon budgets and the policies that could be used to meet them to the government to vote on. Then, the CCC makes sure the government of the day follows through.

Removing climate policy from political whiplash would make it far easier for Canadian individuals and businesses to plan ahead efficiently. It would help eliminate the chaotic policy reversals that come with each change in government. For example, as prime minister, Stephen Harper was famously opposed to carbon pricing: "Anybody who tells you that a carbon tax is an environmental policy is trying to pull the wool over your eyes." A few years later, the new Trudeau government switched Ottawa's focus to put carbon pricing at the centre of Canada's climate policies. The Conservative opposition threatens to eliminate the policy when they get back in power.

Key 4: Carbon budgets that cover all emissions in all years

At the heart of the U.K. Climate Change Act tool kit is the concept of "carbon budgets." The law requires the U.K. to set legally binding five-year carbon budgets. These must include all emissions in every year. These budgets are a critical tool to keep the country on track.

What are we waiting for? How much deeper into the gathering climate storm are we going to keep flying blind and dangerously off course? 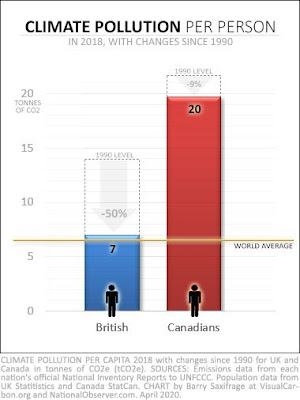 Canadians, in contrast, have cut little from our direct emissions in the past three decades. Since 1990, our pollution per capita has gone from 22 tCO2 to 20 tCO2. At this rate, it will take us centuries just to get to where the British are now. We currently pollute triple the global average. And despite being one of the world's "Dirty Dozen" climate polluters, both in total emissions and per capita, we haven't taken responsibility for our excesses by meeting our climate commitments — or even by creating a plan that meets them.

It's not that Justin Trudeau isn't sincere. It's just that he's not up to the job. He's got 10 years. Lots of promises. No plan. Remember, this is the Liberal government that proclaimed a state of climate emergency and then, less than 24-hours later, greenlighted a massive bitumen pipeline expansion.

No doubt about it, the Brits have done far better.

But then they have a political setup that allows them to do it. There are no lowbrow ravening-wolf woolly-headed provincial politicians to account for over there. There's Westminister that sets policy, and then local councils. No local council can countermand environmental regs. Here we have a lot of environment policy run by dolts commonly known as provincial premiers. Today, the only one with the faintest sign of common sense is MacNeil in Nova Scotia who shut down Boat Harbour. The rest of them are Conservatives or you have Horgan in BC who thinks fracking natural gas with all its leaks is a great idea.

So we're not comparing apples to apples. The carbon tax caused apoplexy out in Alberta and Doug Fraud decided to put up signs in gas stations condemning it in Ontario, while the fascist joke they have as a premier in Alberta cut out all environmental monitoring of tarsands production.

The feds could do all they want on policy matters and still face lowbrow provincial politicians with too much power and common sense distilled from an ocean of illiteracy and parochial backgrounds.

I pondered the unitary versus federal government model when I wrote this, BM. Of course you're right. It is a more intractable problem in Canada especially, as, North Sea oil aside, Canada is the greater petro-state.

If we're to be resigned to failure we should at least admit our confederation denies any hope of success. It's time to drop the pretence. For years the premiers of our westernmost provinces flirted with the idea that they could use the 'carbon sink' of our vast swathes of forest as a carbon offset to negate our carbon energy emissions. Now those forests are a 'carbon bomb' and they're stripped of that crutch.

We have been a carbon pariah and we're not changing. We'll go through this dance of promising so much and then waiting for the inevitable change of government to transfer the blame.