George Will Wants the GOP, the Lot of Them, Cast Into the Flames of Hell. 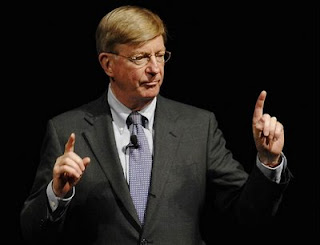 It's no secret that columnist George Will is no fan of Donald Trump.  Now George has gone a couple of steps further. He wants the GOP crushed at the polls in November.

And, yes, George is wishing a pox on Trump's enablers, every Republican in the House and Senate.


"In life's unforgiving arithmetic, we are the sum of our choices. Congressional Republicans have made theirs for more than 1,200 days. We cannot know all the measures necessary to restore the nation's domestic health and international standing, but we know the first step: Senate Republicans must be routed, as condign punishment for their Vichyite collaboration, leaving the Republican remnant to wonder: Was it sensible to sacrifice dignity, such as it ever was, and to shed principles, if convictions so easily jettisoned could be dignified as principles, for ... what? Praying people should pray, and all others should hope: May I never crave anything as much as these people crave membership in the world's most risible deliberative body."

But, surely, Will doesn't really want the Republicans on Capitol Hill cast into the flames of Hell, does he?  Actually, he does.


"The measures necessary for restoration of national equilibrium are many and will be protracted far beyond his removal. One such measure must be the removal of those in Congress who, unlike the sycophantic mediocrities who cosset him in the White House, will not disappear "magically," as Eric Trump said the coronavirus would. Voters must dispatch his congressional enablers, especially the senators who still gambol around his ankles with a canine hunger for petting."

Jeez, Mound, I used to watch/listen to old George drone on about how great the world was when right wing politicians were running things. Seems like he just wasn't ready for the "prime time" mad hatter version but I guess Trump's idea of what it means to be POTUS has produced a real fire in old George's belly.
Who'd a thunk it!


As I recall it, GW left the GOP a couple of years ago because of Trump. I guess turning on Congressional Republicans, calling for their political extermination, is a logical next step.

Hmmm... No mention of tumbrils and guillotines. Yet.


Cap, I have a close friend who is a veteran Tory insider, a Bob Stanfield Conservative. During the 2015 election campaign my friend told me of a number of old school Tories who could no longer abide Harper's authoritarian excesses and had decided to either abstain from voting or cast their ballots for the Liberals. I think old school, patrician Republicans are nearing that same point. It will be interesting to see if a breakaway group emerges following the GOP convention.

LOL! I think the various ideological purity purges since Gingrich have pretty much flushed any patricians from the GOP. Trump was just the chef's kiss on the process.

I actually voted for Stanfield. It was my first time voting and a friend's dad was running for the PCs in our riding. I voted for him and he lost. Thus began a long history of me supporting losing candidates, although never again from the Tory party.

I had my photo in the Canadian edition of Time sticking a microphone in Stanfield's face on the day the writ dropped. Wasn't that an election. Trudeau terrified labour with "Zap, you're frozen." The union vote deserted David Lewis and the NDP to help Trudeau defeat Stanfield. I was assigned to cover Lewis for the duration. Trudeau defeated Stanfield but he destroyed the NDP. With that I got back on with a trip to Europe derailed by the election. I wasn't back more than a day or two when word came that Trudeau was going on television in the evening. He jolted Canadians with his announcement of wage and price controls. Zap, we were frozen - only not by Bob Stanfield.