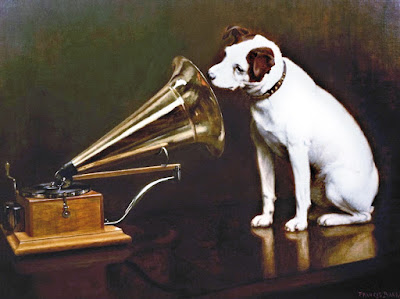 The image is from an ad for the RCA Victrola entitled "His Master's Voice."  Somehow it just keeps coming to mind when I watch the corruption of justice in America in the era of Donald Trump and his personal "Renfield," Attorney General Bill Barr.

Trump and Barr, together with a Republican controlled Senate, have worked methodically to subvert justice and the rule of law in the United States. They have stacked the judiciary with hundreds of pro-Trump judges chosen for their political reliablility, not their legal excellence. These men and women are awarded their lifetime gigs with clear strings attached.

At the same time Barr, at the direction of Trump, has transformed the Department of Justice into Trump's personal prosecution agency. They've sacked not one but two US Attorneys for the Southern District of New York. Why SDNY? That's the district where most of Trump's cronies reside, guys like Roger Stone, Paul Manafort and Trump's former minion, Michael Cohen. They've even tried to put their "own" guy in, a SEC stooge with no prosecutorial experience whatsoever.

To Trump and Barr, prosecutorial independence means less than the integrity of the judicial system itself. Barr manipulated the prosecutors' sentencing submissions on Roger Stone, even as Trump was saying he'd pardon Stone, his personal lifelong buddy. That was pretty outrageous. Then another Trump minion got caught in a jam, Michael Flynn. Not only were Flynn's crimes obvious, he confessed to them. Convictions were entered. Sentencing was imminent. Not so fast. Barr, who works for the people of the United States, not Donald J. Trump, directed the DoJ prosecutors to apply to court to have the charges - plainly made out, to which Flynn had confessed his guilt, and on which convictions had been entered - dismissed, erased, wiped out. Think of it as Bill Barr's judicial time machine.

These outrages scream "obstruction of justice." They reveal a judicial system in which both the prosecutorial and the judicial bodies have become manipulated, where they have succumbed to corruption.  Left unchecked this will mean the end of American democracy or what faint vestiges of that still remain in the United States.

Still, it's not over yet. There is a glimmer of hope. Lately I've been following a retired former federal prosecutor, Glenn Kirschner. In the wake of yesterday's appellate court 2-1 decision directing the trial judge to be a good boy and take Michael Flynn off the hook, Kirschner says the trial judge isn't going down without a fight.

Roberts (imo) has figured out that going whole-hog on tRump's agenda, just a few months before the 'accountability moment' (W's nickname for elections) could ultimately sink the whole damn edifice. FOr example: a quick expansion of the court with all Dem appointies if the landslide rout of Rethuglicans actually happens. He fears that feeding the rw base with irrational decisions that make them happy could help cause said landslide.

Events on the ground seem to support this idea:
AOC won a huge primary victory in NY 14 despite the millions Wall street put up to oust her. And next door in NY 17 a terrible Dem, Eliot Engel, was ousted by a strong progressive Jamaal Bowman. Rethuglicans and rw Dems are both at risk if this real democracy movement can finally take over the Democratic Party apparatus.

The current voting systems (yes, plural, every State and County must run & fund their own little parochial setups) are hopelessly compromised.
Only landslide wins in 'swing' states will defeat tRump. (Obama likely won by much bigger margins than reported - too much for even the cheating to nullify.)

Roberts may have the occasional change of heart and America should be grateful for it.

.. Glenn Kirschner is a certified 'gem' ..
I had to interrupt my viewing.. 1/2 way through.. but I really wanted to see & hear the 2nd half. It was exceptional ! I did see it to the end. He really built that episode beautifully.. it really 'sang' as he went through the 3 remedies for Trump, McConnell and Barr. People like him lend hope, that the damage done can be addressed.

(I must see if he has in the past offered opinion on The Omar Khadr Case, and also in regard to Israel annexing Palestine, certainly there must be other cases he prosecuted over his career. I wonder if he has a biography or other published work - will look / see)

FYI - I am still 'shaping' my ideas for a podcast.. discussing the 'mechanics' and workflow with my son. But it seems to be evolving in a sort of visual 'blog magazine' creature. It will have a 'structure thread' or consistant content approach meaning each episode will include certain media & topicality.. Literary - Environmental - Photography - Entertainment.. and of course 'hot links' to exemplars work or careers. If you visit 'Serial' Season Three (its audio only) you'll immediately see why I referred it to you.. in particular. Season Two is very similar but involves a famous military case .. again you would or will appreciate the 'topicality' I find I can walk or ride a bus and listen to episodes.. but I must eliminate distractions.. as the layers & nuance require, indeed deserve focus and attention. This afternoon I intend to listen to Season Three - Episode Two. Will update you re my 'checklist' for a podcast.. or is it a webcast ? Or both at once ?

Hey, Sal. Kirschner's content is exclusively American. His YouTube site dates back to Feb., 2018. He does guest shots on MSNBC and NBC and teaches law. I don't think he wanders far out of Washington and federal court issues.

Good luck with your venture. Do keep me apprised.

I got a chuckle when Kirschner said he didn't pay attention to who appointed the judge. Typical prosecutor! I doubt his colleagues on the defense bar had that luxury. It would be hard to defend a POC effectively without knowing whether the judge had been appointed by the neo-Confederate party of Mitch McConnell.

As for the US justice system, I'm not sure it was ever not broken. Yes, it sometimes delivers justice, but systematically it does the opposite - hence the massive protests. The difference is that now some judges don't even pretend to be impartial. Neomi Rao, who authored the majority decision in the Flynn case is an example. Appointed by Trump to replace Bart O'Kavanaugh, she articled for Clarence Thomas. As Kirschner points out, her reasoning and grasp of facts in this decision is weak, just as it was in her dissent in the case forcing Trump's accounting firm, Mazars, to turn over his tax records. Like most Federalists, she's an ideologue who uses specious reasoning to reach a predetermined conclusion. Unfortunately, there are so many more like her that I think Kirschner is being optimistic in his hope for a fix. He doesn't address systemic problems like the massive politicization of the appointment system or the inherent conflicts of interest in judges campaigning for their seats. I think the system is borked, regardless of what happens in the election.

We will know the way of the future very soon when the SCOTUS rules on Trump's tax cases. Look for a ruling favourable to him from his flunkies. That is when the true impact of the Trump revolution takes hold - look for more autocracy and compliant Repugs.

Of course all of us optimists think that these actions will drive more people to the polls - don't bet on it!