"A Gross Abuse of Prosecutorial Power" 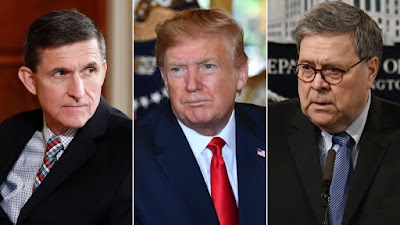 Trump's corrupt Attorney-General, Bill Barr, has directed the Justice Department to seek a court order withdrawing charges against a Trump pal, charges that this guy already pleaded guilty to.

The judge wasn't having it. Instead he appointed a former mafia prosecutor and retired federal judge, John Gleeson, to serve as amicus curiae on this bizarre application.


“The government has engaged in highly irregular conduct to benefit a political ally of the president,” wrote John Gleeson, who was appointed to a special role to argue against the Justice Department’s unusual effort to drop the Flynn case. He added: “Leave of court should not be granted when the explanations the government puts forth are not credible as the real reasons for its dismissal of a criminal charge.”

The Justice Department “has treated the case like no other, and in doing so has undermined the public’s confidence in the rule of law,” Mr. Gleeson wrote.

The government’s ostensible grounds for seeking dismissal are conclusively disproven by its own briefs filed earlier in this very proceeding,” Mr. Gleeson wrote. “They contradict and ignore this court’s prior orders, which constitute law of the case. They are riddled with inexplicable and elementary errors of law and fact. And they depart from positions that the government has taken in other cases.”

It really doesn't matter whether the charges are dropped or Flynn is sentenced. Trump has already announced his intention to pardon Flynn, vowing he'll never spend a night in jail.

And yet, what I have heard recently is that Trump is going to run his campaign on two of his own perceived strengths:

1. He is a law and order president
2. He is the best there is at managing the economy.

If I was an American I would be frightened to death of what the results of the coming federal/presidential election might produce (and I haven't even touched on vote tampering).