Yes, Mr. Trump. Remind Everyone What a Lousy President You Really Are. 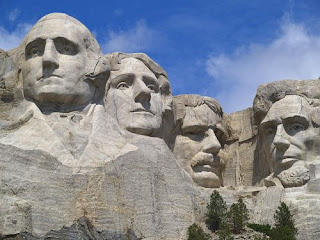 Another brain fart from the Mango Mussolini.

Trump wants a fireworks extravaganza to usher in the 4th of July.

The mountain that is surrounded by tinder-dry forest of ponderosa pines. That's pine as in resin as in extremely flammable.


"It's a bad idea based on the wildland fire risk, the impact to the water quality of the memorial, the fact that [it] is going to occur during a pandemic without social distancing guidelines and the emergency evacuation issues," said Cheryl Schreier, who served as the superintendent at Mount Rushmore National Park between September 2010 and May 2019, to The Washington Post.

Bill Gabbert, the former fire management officer for Mount Rushmore and six other national parks in the region, told The Associated Press that shooting fireworks over the extremely flammable ponderosa pine forest should not be done.

On the other hand it would remind the American people that they once had presidents of the stature of George Washington, Thomas Jefferson, Abraham Lincoln and Theodore Roosevelt. That should drive home the point of what a lousy president they're stuck with today.

This is a perfect moment to segue to Fintan O'Toole's take on America's Covid-19 president.


It is a truth universally acknowledged that Donald Trump is no George Washington, but his descent from commander-in-chief to vector-in-chief is nonetheless dizzying. Trump’s narcissism, mendacity, bullying, and malignant incompetence were obvious before the coronavirus crisis, and they have been magnified rather than moderated in his surreal response to a catastrophe whose full gravity he failed to accept until March 31, when it had become horribly undeniable. The volatility of his behavior during the crucial weeks of February and March, when coherent action could have limited the subsequent loss of life—the veering between flippancy and rage, breezy denial and dark fear-mongering—may not seem to demand further explanation.

Fascinating clip, Rumley. Karma, as they say, is a bitch. That was a pretty powerful device given how quickly it set fire to that car. The passengers knew that and were quick to bail out. Then the cops find the driver has a warrant for felony evasion. So his car is a burned out hulk and he goes straight to the Greybar Hotel. Bonus.

Gabbard's just a nervous Nelly. Get a few people out raking the forest like they do in Finland and all will be fine.


Yes, perhaps America can import a legion of Finns to man those rakes, Cap. Sort of like how Canadian Pacific brought in swarms of Swiss mountain guides for the Banff Springs hotel. The grandfather of a former girlfriend guided all sorts of Hollywood types and he even took PET up into the mountains.

Donald Trump is what he is, a Natzi.