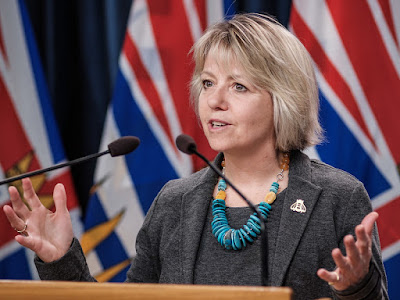 If there's been one standout on the fight to tame the Covid-19 virus in Canada, it has to be British Columbia's medical officer of health, Dr. Bonnie Henry.

The New York Times has published a feature on Dr. Henry and her amazing life's work from tracking ebola to wrestling SARS to the ground in Toronto to the amazing job she has done for British Columbia dealing with this contagion.


That Tuesday in March was the day Bonnie Henry had been preparing for her whole life.
Overnight, 83 people had tested positive for the novel coronavirus and three more had died. The pandemic had officially broken out in British Columbia.

“It seemed so surreal,” she said. “I felt like someone was standing on my chest.”

That day, March 17, Dr. Henry ended her presentation with a line that would become her trademark, and a mantra for many Canadians struggling to cope under a lockdown. It has since been hung in windows, painted on streets, printed on T-shirts, stitched on shoes, folded into songs and stamped on bracelets.

“This is our time to be kind,” she said in her slow and low-pitched voice that many call comforting, “to be calm and to be safe.”

In the next few months, Dr. Henry would prove to be one of the most effective public health officials in the world, with lessons for nations struggling to emerge from lockdowns.

The article covers her work as a physician in the Royal Canadian Navy and then in a host of civilian jobs including one in California.


One day at her job at a clinic in San Diego, a man burst in with a gun, demanding to talk to someone. Dr. Henry stepped forward. “I said, ‘I’m somebody. Let’s talk,’” she recalled. “He burst into tears. He was in pain and distraught.”

It turned out he was recovering from open-heart surgery and was unsure how he would pay the medical bills.


“It’s almost like she was groomed for this time,” said Dr. Anthony Mounts, a senior adviser for immunizations with the U.S. Agency for International Development, who met Dr. Henry in Pakistan working on polio immunization two decades ago. “But the job comes at enormous personal cost.”

It's important that we remember what might have been, in large part but for her.


“By all rights, British Columbia should have been clobbered,” said Colin Furness, an outspoken infection control epidemiologist in Toronto. The province is on the coast, above Washington State, he noted, with a large population that travels back and forth to China, where the outbreak began.

“They took decisive action, did it early without hesitation and communicated effectively,” Mr. Furness added. “People listened to her.”

"People listened to her." Did they ever. The first time I ventured out - for groceries - in what was probably week three of the lockdown, I was astonished at how everybody was diligently following the rules - masks, hand sanitizer, social distancing - it was almost as though they had been doing it all their lives.  The premier, Horgan, and his health minister, Dix, did us all a big favour as they stayed in the background instead of trying to score political points.  She was allowed to speak to British Columbians directly and we listened.

Dr. Henry has done a remarkable job. And she has a calm but authoritative voice. Too bad we can't clone her.

Maybe I am just a contrarian, but I fail to see what Henry has done that is so remarkable and either the NYT article missed it or I missed it in the article.
My take:
* I and my partner were heavily social distancers a few weeks before any lockdown.
* My employer had us all working from home a week before any measures were in place
* Just before the lockdown Henry was saying that travelling was bad idea but we should all go skiing locally (Pro Tip: You cannot social distance on a chair lift or in a Gondola)
* After giving that advice she was somehow dumbfounded about crowds on the Chief.
* She has herself admitted that a lot of it was good luck in the timing of our March break for schools.

What am I missing? Seriously, if I am missing something I would like to know.

What your missing, GG, is how she persuaded us to embrace her advice. It paid off. BC, by virtue of its proximity to Washington, which has been identified as a major source of our Covid infections and our dealings with China, ought to have been a nightmare. It wasn't. Our two dominant sources of the virus were Washington and central Canada.

Knock her if you want. Some of that is to be expected.

Thanks for the perspective.

For what it's worth I am not knocking her either, I just didn't see what the fuss was about. I'm more inclined to think she did a decent job and luck and possibly a Chinese-Canadian community that didn't want to relive SARS were bigger factors. I know that fully a month or more before the lockdown my employer was requiring people who had been to Hunan (lots went for New Year) to stay out of the office for two weeks. I wonder how much other pre-emptive work happened in BC because we figured we'd get blasted with this plague.

As I said, my partner and I were early adopters of isolation and the early missteps caused us to distrust the both Henry and Tam (no need for masks, they don't work, you can't catch it outdoors, no asymptomatic spread, etc.). A lot of what they said didn't add up so we took a very cautious road.

However, I can see the argument that she must have done something right because of the results. I just would like to understand what it was that was different between here and similar places that didn't fare so well.