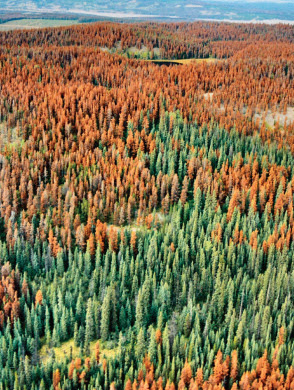 It wasn't that long ago that Canadian politicians played the "carbon sink" card in climate change negotiations.

The argument was that Canada had these vast tracts of forests that captured enormous volumes of CO2 from the atmosphere and, hence, that should be factored in. Perhaps we should be allowed to sell "carbon credits" on the strength of this carbon sink. If not, at least we should be able to use that carbon capture to offset man-made emissions.  Or so the arguments went.

Our leaders don't make those arguments any more.  Eager as they were to claim credit for the carbon sink, those forests today have transformed into a "carbon bomb."


Our forests are dying and being cut down faster than they can grow back.

In 2018, the flood of CO2 pouring out of them reached record levels, at nearly a quarter billion tonnes of CO2 in a single year. That's more than Canada's once biggest climate pollution source — the oil and gas sector — emitted that year.

Sadly, this isn't a short-term aberration. The long-term trends are relentlessly grim. They show that our forests switched from much-needed CO2 sinks into dangerous CO2 emitters more than a decade ago. And what started as a trickle has grown into a flood of CO2 pouring into our atmosphere.

While the report is focused on our "managed forests," the forest lands we use commercially, it's the same story for the boreal forests that stretch the breadth of Canada right out to Newfoundland and Labrador.

Bad forestry practices are a problem but so too are climate change and the related problem of insect infestations. The author of the National Observer article advocates limiting sharply reducing logging.


If we want to continue logging at current high levels, we will need to restore the carbon sink in our forests or find another way to offset the huge emissions of CO2 from our harvested wood. But we need to do those things anyway to achieve "net zero" in all other sectors of economy.

The climate science is clear that the path to a safe and sane climate future requires us to eliminate all sources of excess CO2, regardless of origin.

So far, however, Ottawa has responded to this emerging CO2 threat by trying to push this rising new flood of CO2 off the books. To do this, they've had to roll out a series of big and controversial changes in how they account for forest carbon.

But the atmosphere and the laws of physics don't care what kinds of creative accounting we try. They only react to the total amount of CO2 accumulating in the air. And in Canada, total emissions of CO2 are not going down as promised and as required for a safe future.

I'm not averse to curbing logging, at least until we can find workable solutions.  I don't doubt his claims that Canada's "managed forests" were responsible for 240 MtCO2 in 2018.


That's more than any other sector in Canada. In fact, our managed forests were the largest emitters of greenhouse gases in Canada for three of the last four years in the NIR data.

What his argument obscures is what's happening to the rest of our forests, the vast swathes that are not commercially viable. Our forests, both managed and wild, are being ravaged by climate change. This comes in a variety of forms, among them a warming climate, heatwaves, and droughts.

The warming climate has also brought insect infestations, the pine beetle in particular. Those beetle populations were once held in check by freezing spells in winter but climate change has stripped us of that natural defence. For a while we hoped that the mountain chains of eastern BC and western Alberta would keep the insect contagion from spreading. Then came news the beetles had crossed the Rockies and had moved into the Boreal forests with nothing to stop them from eventually reaching Labrador.

The process is simple. The beetles infest the forests, the trees die off, they dry out and become tinder for wildfires that release massive amounts of CO2 and other contaminants such as black carbon into the atmosphere. Bad forestry practices have almost nothing to do with that.  It's not just Canada either. Wildfires sweep from the Mexico border up through the western States, through Canada and into Alaska. These days wildfires even get into the Arctic.

If reining in the forest industry will make a real difference then, sure, let's do it. However we can't delude ourselves that would be a solution, a cure-all for the carbon bomb problem.

Is Gaia simply burning off the unsustainable forests to make way for desert vegetation?

Given that sea level rise is the other bookend here, an ironic analogy is that fighting these fires is a little like King Canute holding back the sea.


I really don't understand what the forestry industry is thinking, NPoV. They want to reforest with more pine, a species that easily succumbs to beetle infestations and climate stresses. There are species that are more drought and insect resistant that we could be changing over to such as fast-growing red alder but no one wants to go there.

Todays forestry is based upon fast growing trees that will never be old growth.
They are softwood equivalents to turf farms.

Monoculture does not stand the test of time.
One size , one fit is not sustainable.
It's uniculture perhaps even globalculture

I spend my walking days in replanted forests that straddle what is left of second or third growth forest.
Much of the third growth is nothing but tax break land as it awaits re designation as developable land.

Like the British coal mines and East cost cod , BC' forests are doomed to disappear in the name of GDP.