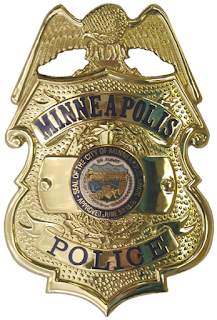 I'm not sure how this will work but the Minneapolis council is going to defund the city police department.


A veto-proof majority of the Minneapolis city council has announced its intent to dismantle the city’s police department and invest in community-led public safety, a move that would mark the first concrete victory in the mounting nationwide movement to defund law enforcement agencies in the aftermath of the police killing of George Floyd.

Nine of the council’s 12 members announced their pledge to create a new system of public safety before hundreds of demonstrators at a rally at Powderhorn Park in south Minneapolis on Sunday afternoon.

“This council is going to dismantle this police department,” councilman Jeremiah Ellison said.

Minneapolis council president Lisa Bender said, "Our efforts at incremental reform have failed. Period."
Posted by The Mound of Sound at 4:13 PM

What is that bird on the top of the badge?! A buzzard? Seems appropriate if it is.

It will be very interesting to see how the GOP machines in Minnesota react to this move - Governor's intervention, State House decrees etc.

I think when the dust settles Minneapolis will get a consultant driven whitewash acceptable to noone, but everybody will say "Look what we have done" or "Look what they have done" to justify ingrained opinion about the issue.

The proof in the pudding will be when the military machines possessed by the MPD are auctioned off and the "bad cops" are fired.


My guess is that's what they imagine an eagle looks like, Cap. But a Turkey Buzzard might be more fitting. Fun Fact: Buzzards have a unique way of dealing with overheating. They shit on their legs for evaporative cooling. You're right, buzzard it is.

It will be interesting indeed, Ben. Watch Trump threaten to cut off all federal funds to Minnesota as he does wherever municipalities get out of line. Think "sanctuary cities". With that white supremacist, proto-nazi, Stephen Miller whispering in Trump's ear they're sure to spin this into an election issue.

Interesting times. Today India begins lifting its Covid lockdown. The state has cried "uncle" even though the pandemic is surging. I guess they'll be a miners' canary for the rest of the world. Such is the fate of the impoverished in this 21st century.

As you might know, Ben, I follow developments in climate science somewhat closely and the research and analysis of what is to arrive between now and 2030 is, or should be, alarming. It's not going to go well for those who live in equatorial and tropical nations. Again they're usually the poorest and most vulnerable. They're also (shh, keep this to yourself) mainly brown and black people. Thoughts and prayers, Ben. Thoughts and prayers.

One would hope this sort of thing would happen more often: https://www.bloomberg.com/news/articles/2020-06-04/how-camden-new-jersey-reformed-its-police-department

Beware of what you ask for.
If not a Police department then what, the military, or in the case of the USA the armed militia?
I am sure that the NRA would be please to fill the void.
Reform that sweeps out the old for the untried new, seldom succeeds.


There's a powerful lobby, Troy, the private prison industry that relies on toxic policing to round up "guests" for their institutions, especially plenty of the mentally ill. This prison-industrial complex will see these reforms as a threat.

When you add in the military, Mound, they've got Eisenhower's worst nightmare. The Rethugs will have to implement even more tax cuts to divvy up between these 3 entities. Problem is, the taxpayers aren't in any position to anti up any more dollars, so the only option is further cuts to budgets in the very few social programs that have existed in the bestest, finest democracy in the world. What then?

Mitch McConnell, having presided over massive tax cuts for the rich, intends to recoup the pandemic stimulus from blue and white collar workers. So pernicious is that old reptile that they're moving to strip relief eligibility from those who won't take their old jobs back even as they legislate immunity for employers who expose their workers to virus and other hazards.

Why rank and file Americans haven't risen up and hanged that bastard is beyond me.