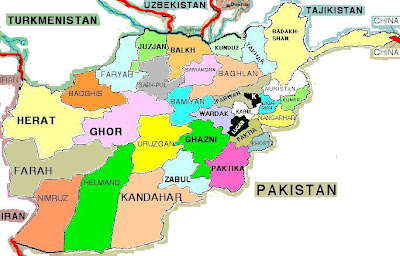 Tomorrow's general election in Afghanistan isn't expected to do the government a lick of good no matter who wins. Unfortunately, it's the Taliban who stand poised to emerge the winners. From McClatchey Newspapers:

President Hamid Karzai's re-election, powered by despised warlords linked to war crimes and drugs, could drive more Afghans to join the Taliban or other militant groups and stoke ethnic tensions, Western and Afghan experts say. A victory by his main rival, former Foreign Minister Abdullah Abdullah, could bring a similar result, they said.

Widespread cries of foul or a delayed outcome could create a power vacuum and lead to violence.

"The election result will not have the legitimacy that it needs. That will add to the ranks of the Taliban and the disaffected and disenfranchised people. It will be a moral victory for the Taliban whichever way you cut it," said Daoud Sultanzoi, a leading parliamentarian from Ghazni Province.

It's been apparent for some time that these elections could leave Afghanistan torn along ethnic and tribal lines. I'd bet that if only Afghanistan had a functioning army capable of taking on not only the Taliban but also the former Northern Alliance warlords, Washington would like nothing better than to support a coup. That "last resort" option, however, doesn't seem viable which leaves the US and NATO having to brace for deteriorating conditions on the ground in Afghanistan. Too little, too late, too bad.

What nobody is mentioning is whether this election could ignite another civil war. Afghan's warlords are notoriously treacherous, willing to jump freely from one side to the other and then back again. With the central government unable to consolidate its power much beyond Kabul except with the collaboration of the warlords, these guys stand to become "free agents" capable of throwing in with the insurgency whenever they judge the moment is right.
Asia Times Online has an interesting analysis of how badly the West, especially the US, has bungled the Great Game in Afghanistan:
Kayhan newspaper, which is identified with the religious establishment, commented: "[Afghan President] Hamid Karzai is truly in a bit of a corner ... Challenges are mounting from every side ... Presidential hopeful Abdullah Abdullah's camp has been acting most peculiarly." The commentary then came out with strong endorsement of Karzai's alliance with the so-called warlords as embodying an approach "to keep the country from falling apart", which recognizes that "Afghanistan is and has been a federation of provinces ruled over by strongmen".
It concluded: "Afghanistan can only be governed via federal rule and Mr Karzai understands the latter fact very well but he can't come out and say it to his Western patrons. His balancing act sometimes falls short of Western expectations and at other times gets right up Afghan warlords' nose. And criticisms immediately follow from either party. The West has sought to 'clear, hold and build' a functioning Afghan state on the Western model in which citizens' assent to a social contract that imposes social and political discipline in exchange for allowing a relatively wide berth in the personal realm. This places the Americans, right from the start, in total opposition to the last thousand or so years of Afghan history, just as it did the Soviets."
Tehran has every reason to be pleased with Karzai's close alliance with erstwhile mujahideen leaders such as Ismail Khan, Mohammed Fahim, Karim Khalili, Mohammed Mohaqiq and Rashid Dostum. Tehran obviously had a hand in persuading Dostum to return from Turkey -- defying US warnings - and galvanizing the Jumbish party just in time to boost Karzai's electoral prospects in the Amu Darya region. The Uzbekis and Hazara Shi'ites account for well over a quarter of the Afghan population.
Besides, Ismail Khan, who is close to Tehran, is allied to Burhanuddin Rabbani. Khan's support for Karzai at this juncture undercuts the entire US-Pakistani strategy behind fielding Abdullah, which was based on the premise that he would garner Tajik votes. Thus, if Karzai's prospects have distinctly improved on the eve of the elections, Tehran has a hand in it.
Washington is aghast that its entire stratagem to prevent a first-round victory by Karzai is in serious jeopardy. (Karzai, the front-runner, would need to win 51% of the total votes cast to avoid a run-off with the second-placed candidate.)
In an extraordinary public vent of choler, the US State Department said in Washington: "We have made clear to the government of Afghanistan our serious concern regarding the return of Mr Dostum and any prospective role in today's Afghanistan." President Barack Obama has already asked his national security team to give further information on Dostum's "background", including concerns that he might have been involved in the deaths of a significant number of Taliban prisoners of war in 2001 during the US invasion.
Holbrooke faces a huge challenge. If Karzai secures a clear-cut victory in the first round on Thursday, it will bring into power a coalition that the US will find extremely hard to control as there will be multiple power centers.
Posted by The Mound of Sound at 6:54 AM