Calley Apologizes for My Lai Massacre 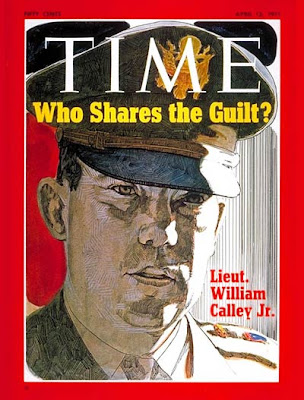 It's taken four decades but former US Army lieutenant William Calley has apologized for the 1968 massacre when he and his men gunned down hundreds of villagers - men, women, children, even babies - in the Vietnamese hamlet of My Lai. The US Army covered it up so well that the number of dead can only be estimated as between 350 to 500.

Calley had long refused to grant interviews about what happened, but on Wednesday he spoke at a Columbus Kiwanis meeting. He made only a brief statement, but agreed to take questions from the audience.

He did not deny what had happened that day, but did repeatedly make the point — which he has made before — that he was following orders.

Calley explained he had been ordered to take out My Lai, adding that he had intelligence that the village was fortified and would be “hot” when he went in. He also said the area was submitted to an artillery barrage and helicopter fire before his troops went in. It turned out that it was not hot and there was no armed resistance. But he had been told, he said, that if he left anyone behind, his troops could be trapped and caught in a crossfire.

Asked about American casualties, Calley said there were two injuries, but neither was the result of enemy fire, adding, “They didn’t have time.”

...When asked if obeying an unlawful order was not itself an unlawful act, he said, “I believe that is true. If you are asking why I did not stand up to them when I was given the orders, I will have to say that I was a second lieutenant getting orders from my commander and I followed them — foolishly, I guess.” Calley then said that was not an excuse; it was just what happened.

The officer Calley said gave those orders was Capt. Ernest Medina, who was also tried for what happened at My Lai. Represented by the renowned Defense Attorney F. Lee Bailey, Medina was acquitted of all charges in 1971.

Calley was convicted, spent a brief time in custody and then was paroled and discharged by the US Army.
Posted by The Mound of Sound at 7:12 AM

Email ThisBlogThis!Share to TwitterShare to FacebookShare to Pinterest
Labels: My Lai