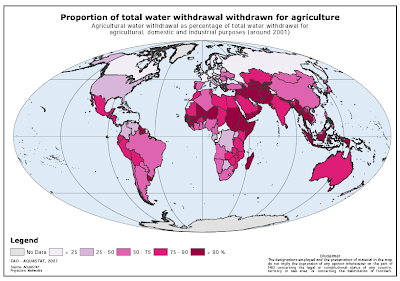 India and its increasingly perilous freshwater supply are a formula for no end of trouble.

Ever since Western science brought India the blessings of the Green Revolution, the "world's largest democracy" has been rapaciously consuming its freshwater resources, mainly for irrigation. The problem is that Indian farmers, just like farmers around the planet, have become dependent on water resources, especially groundwater, that nature simply cannot replenish.

It's easy to grasp. If you're irrigating your fields from water pumped out of an aquifer at the rate of 10X per year but precipitation trickles back into that reservoir at only 1X per year, you're on a one way road to the very bottom of that reservoir. Eventually your agricultural production, that has become dependent on 10X per year of water is going to find itself with but a small fraction of its needs. That's when agriculture craters, leading to food shortages, triggering social unrest.

Parts of India are on track for severe water shortages, according to results from Nasa's gravity satellites.

The Grace mission discovered that in the country's north-west - including Delhi - the water table is falling by about 4cm (1.6 inches) per year.

The finding is published two days after an Indian government report warning of a potential water crisis.


That report noted that access to water was one of the main factors governing the pace of development in the world's second most populous nation.


..."We looked at the rainfall record and during this decade, it's relatively steady - there have been some up and down years but generally there's no drought situation, there's no major trend in rainfall," said Matt Rodell, a hydrologist at Nasa's Goddard Space Flight Center near Washington DC.

"So naturally we would expect the groundwater level to stay where it is unless there is an excessive stress due to people pumping too much water, which is what we believe is happening."

The Indian government is right, this is a genuine crisis. For, bad as the groundwater problem is, India also faces two other problems - disruption of the Monsoon rains and the headlong retreat of the Himalayan glaciers. When the country's food supply depends on pumping groundwater at plainly unsustainable levels and the mountain headwaters that supply its main rivers are in jeopardy and the Monsoon has become unpredictable/unreliable this is a house on fire.

India's dream of its own Industrial Revolution is little more than a dream without an abundance of water. Manufacturing of almost any sort demands massive amounts of freshwater, massive and reliable. To that add the wastewater problems - pollution and other contaminants that can render other surface water resources unfit for human or agricultural use. That's what China has been doing for many years.

Forget oil, water is the key. Water is life itself and the more densely populated the nation the more that's true. We know the Indians have a major water crisis in their cities. Some of the secondary cities haven't had municipal water since April and the current drought isn't going to make that any better. Residents have to rely on trucked water, creating the inevitable supply and demand pricing which is bad news for cities with a lot of urban poor. The UN maintains that the minimum freshwater requirements for hydration, cooking and hygiene is 20-litres daily. What if you can only afford half that?

Without plenty of water, India's dream of economic superpowerdom slips straight through its fingers - and down the drain.

(The map at top shows agricultural water use by nation. The darker the red, the greater percentage of the existing water resources is taken for agriculture. The darkest red represents 90% +. India is shown in the 75-90% range. Unfortunately this is based on normal precipitation and doesn't account for the current droughts or the looming problem from the disappearing Himalayan glaciers. Every country in the two darkest colours is facing an eventual freshwater crisis. Nations in the second-lightest colour - such as the United States - are facing freshwater problems. Take a look at what's left - Northern Europe, Russia and Canada.
The map below shows current drought regions. When you match up water use from the map above with drought shown below, it gives you an idea which countries are burning the candle at both ends.) 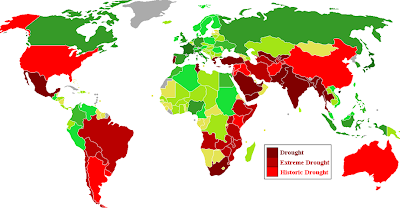 A serious involvement from the governement is required if India is to overcome the shortage of fresh water.

India, hello. You're right, your country urgently needs government intervention. Unfortunately I suspect India will, instead, fall prey to the multinational water vultures that are massing to take over fresh water supply to the world's most vulnerable nations.

Countries like India are particularly susceptible to these firms. Two factors are especially relevant. First, these companies operate two ways. They provide a service - transportation and distribution - but once in their control, they charge consumers for that water as though it was a commodity the companies owned. They make a magical leap from a service provider to a commodity vendor. Second, India has an enormous gap between rich and poor. Commodities are sold at market prices and, in India's case, that market will consist of wealthy Indians, well-off Indians (middle class), and the lower and poorest classes. All of these classes, with their disparate purchasing power, will be consumers of the same product but, here's the kicker, they'll also be competing in a marketplace driven by India's burgeoning industrial sector, a voracious consumer of water.

With a decline in natural sources of water - precipitation, snow melt - agriculture will also become dependent on commodity water for irrigation.

The idea of pricing water as a commodity has some merit in those places where there is ample water except that the population uses it wastefully. It can then be priced to bring demand down within the existing supply by curbing wastage.

Indians, from what I've read, aren't wasters of water. They don't need an invoice to make them understand the importance of conservation.

Because of India's circumstances, I think it's the Indian government must retain full control over the country's water resources, not multinational "for profit" corporations.