Climate Wars? China and India Square Off in Himalayas 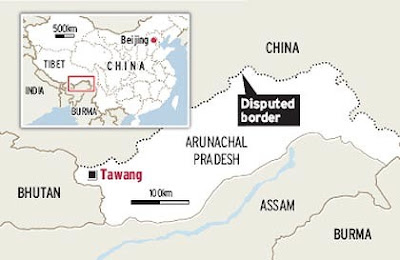 Asia's two emerging economic giants, China and India, have a lot in common. One thing is a common dependence on Himalayan glaciers for meltwaters to feed their key rivers. These glaciers are fast retreating thanks to global warming and a couple of other contributing factors but there's not a lot China or India can do to prevent that. They're going to have a hard enough time just trying to adapt to it.

Still it came as a surprise to read in today's Sydney Morning Herald of a border standoff underway between India and China along China's border with the Indian province of Arunachal Pradesh.

China lays claim to much of Arunachal Pradesh, a mountainous Indian province on the country's north-eastern extremity, and strategic experts in New Delhi warn that tensions in the remote border region are on the rise.

''Largely unknown to the rest of the world, India-China border tensions have escalated in recent months,'' says Brahma Chellaney, professor of strategic studies at Delhi's Centre for Policy Research. ''Things are getting really intense and from the Indian perspective outrageous.''

More aggressive border patrolling by Chinese forces including incursions into Indian territory has forced the Indian army to bolster its presence along the 3500-kilometre border, analysts claim.

The newspaper account suggests that China is beginning to play hardball.

...A day after this week's talks, India's foreign policy establishment was rattled by Indian media reports that a think tank linked to the Chinese military had called for India to be split into 30 independent states. The paper said that if China ''takes a little action, the so-called great Indian federation can be broken up''.
This would be in China's interests and lead to more prosperity in the region, it said, according to reports. Countries friendly to China like Pakistan, Bangladesh and Nepal could help ''different nationalities'' such as Tamil and Kashmiri people so that they can establish independent nation states of their own.

...In June the Governor of Arunachal Pradesh and former army Indian chief, retired general J.J. Singh, said up to 30,000 new troops would be deployed in the region. In June a state-run newspaper in China accused India of ''unwise military moves'' along the Arunachal Pradesh border.

Professor Chellaney says the border tensions are ominous. ''Any doubts that the Indian foreign policy establishment might have had about the threat posed by China have evaporated in recent months.''

How would we like it if Russia began egging on the Greenland Inuit to spark a seccesionist movement among Canada's Inuit? Not so much I'm guessing.
Posted by The Mound of Sound at 11:52 AM