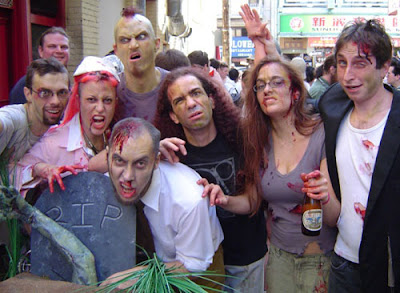 Infectious disease researchers at Carleton and Ottawa U have released a mathematical model of just how long civilization could withstand collapse if attacked by - wait for it - Zombies!

Yes, zombies, those movie creatures that stagger along trying to eat your brain. From BBC News:

The scientific paper is published in a book - Infectious Diseases Modelling Research Progress.

In books, films, video games and folklore, zombies are undead creatures, able to turn the living into other zombies with a bite.

But there is a serious side to the work.

In some respects, a zombie "plague" resembles a lethal rapidly-spreading infection. The researchers say the exercise could help scientists model the spread of unfamiliar diseases through human populations.

Okay, so maybe there is a legitimate purpose for this modeling but it would help if one of the leaders, an Ottawa U mathematics prof, didn't spell his last name, Smith, with a question mark - that's right Smith? Oh yeah, the research showed we'd last days at best.

And did they really have to use zombies? Couldn't they have used a plague of Republicans instead?
Posted by The Mound of Sound at 9:39 AM

And did they really have to use zombies? Couldn't they have used a plague of Republicans instead?

My bad. I should have realized they're both undead, brain-eaters.