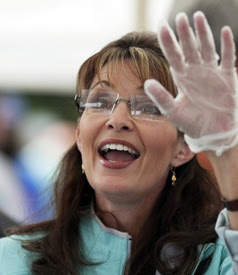 And there it is, the new Sarah Palin unveiled in her latest job - small animal proctologist.

Butt, instead of doing something even moderately useful, the Lizard Queen is busy spewing the most contemptible lies about Obama's healthcare proposals. From Truthout:

...The debate has trailed off into loon tune land, and it's the media's fault.

The lunacy was most clearly in evidence in former Gov. Sarah Palin's claim that President Obama's plan would force her to stand in front of a "death panel" to argue for the life of her baby with Down Syndrome. This "death panel" is a complete invention by Governor Palin. There is no twist or turn or contorted permutation of President Obama's plan that would prevent Ms. Palin from providing as much health care as she wants to her baby.

It would have made as much sense to claim that the transportation bill will deny medical care to her baby. After all, if the roads in front of her home are not properly maintained, and her baby has a medical emergency, then the transportation bill would have effectively sentenced her baby to death because she won't be able to get medical attention in a timely manner.