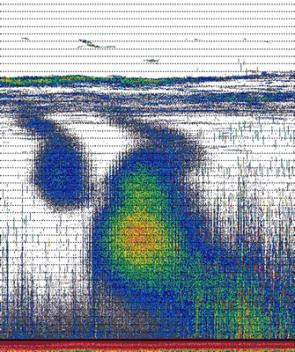 One of the great fears of climate scientists is "runaway global warming." This is point of no return climate change where manmade warming reaches the point that it triggers natural processes beyond our control that discharge masses of greenhouse gases into the atmosphere. These are often referred to as "tipping points" which if you've spent much time in a canoe you'll readily understand.

Scientists say they have evidence that the powerful greenhouse gas methane is escaping from the Arctic sea bed.

Researchers say this could be evidence of a predicted positive feedback effect of climate change.

As temperatures rise, the sea bed grows warmer and frozen water crystals in the sediment break down, allowing methane trapped inside them to escape.

The research team found that more than 250 plumes of methane bubbles are rising from the sea bed off Norway.

...The gas is normally trapped as "methane hydrate" in sediment under the ocean floor.
"Methane hydrate" is an ice-like substance composed of water and methane which is stable under conditions of high pressure and low temperature.
As temperatures rise, the hydrate breaks down. So this new evidence shows that methane is stable at water depths greater than 400m off Spitsbergen.

The image above is an acoustic image of one of these methane plumes. Below is a clip of Alaskan scientists who are monitoring the emission of methane from melting tundra on frozen lake bottoms. They have trouble lighting it at first because there is too much pressure.

What was recently Science Fiction is all too soon a very real possibility:
* This methane-release threat
* Failure of the gulf stream
* Calving/loss of western Antarctic ice shield

You're right. This report concerns methane plumes off Norway but there are plenty of them in Canadian waters too.

I read another interesting report on how little climage change information gets through to the American public via both their mainstream and alternate media. They simply don't have a clue and what they do hear is likely to be heavily filtered or simply untrue.

The simple fact is that climate science doesn't have the advertising funding and clout of the fossil fuel industry and its boosters. You're far more apt to hear a fairy tale about "clean coal" than you are a word about methane plumes.

I hope when the real warming sets in that America breaks on a north-south line and winds up leaving those southern rednecks to their well-deserved fate.

Yikes!
Apparently, companies are already preparing for ice melts in the North and see the advantages of getting ships through.

There's no question of that OEM. The Russians have already begun deploying their fleet of ice breaker-oil tankers with a view to year round operations. It'll be "drill Comrade, drill" once they get busy up there.

The Arctic ecosystem is so pristine that it's easily devastated by even small-scale environmental problems such as oil spills.

The Scandinavians have imposed a development/exploration moratorium on their sector but it hardly matters when the Russians and North Americans race to exploit the Arctic resources.

What is our government doing about this? A. Morris

The simple answer, AM, is nothing whatsoever. A result of atmospheric warming has been the loss of the Arctic ice cap. The white ice/snow would reflect most of the sunlight. The darker ocean absorbs the sunlight, warming the water even further. Warm water eventually warms seabed temperatures enough that frozen methane hydrates melt into gas that heads straight for the surface. A couple of decades back water temperatures were such that hydrates remained stable at depths below 360 feet. Now that has dropped to 400 feet, transforming all those additional hydrates into gas. How much deeper that threshold will fall and how quickly doesn't appear to be known but it's a vicious circle.

If this is one of the dreaded "tipping points" then the whole global warming fight has probably slipped through our fingers. In that case the best we can do is analyze our situation, plan how we'll best respond and start developing and introducing our remediation and adaptation techniques.

Because we can't say with certainty yet that this is a tipping point, we have to continue to seek an effective global agreement to curb carbon emissions while accepting there is a possibility we have or will soon reach a tipping point and doing the planning and preparation in tandem.