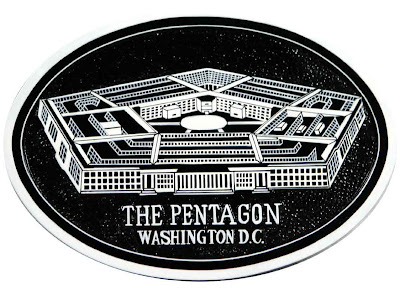 Are global warming denialists enemies of their own countrymen, of the world itself maybe? They might just be that and more.

These rightwing miscreants have, at every turn, thwarted the warnings of scientists. They've used lies, half-truths and a host of distractions to confuse and paralyze public opinion and, in the process, they've delayed meaningful, effective action to combat greenhouse gas emissions by many years, time we could never really afford to squander.

Unable to come up with any valid scientific evidence to refute the reality of global warming, they've resorted to chicanery - pseudoscience and outright lies. They're still managing to spin their nonsense among the dim-witted, including some who hold high political office.

Guess who's not coming to the Denialists' Banquet? The Pentagon. In fact, the Pentagon is already war gaming global warming. That's right, they're war gaming it. They're taking it seriously and they're making it clear it's damned well time Congress did likewise. From The New York Times:

The changing global climate will pose profound strategic challenges to the United States in coming decades, raising the prospect of military intervention to deal with the effects of violent storms, drought, mass migration and pandemics, military and intelligence analysts say.
Such climate-induced crises could topple governments, feed terrorist movements or destabilize entire regions, say the analysts, experts at the Pentagon and intelligence agencies who for the first time are taking a serious look at the national security implications of climate change.

Recent war games and intelligence studies conclude that over the next 20 to 30 years, vulnerable regions, particularly sub-Saharan Africa, the Middle East and South and Southeast Asia, will face the prospect of food shortages, water crises and catastrophic flooding driven by climate change that could demand an American humanitarian relief or military response.

...The Department of Defense’s assessment of the security issue came about after prodding by Congress to include climate issues in its strategic plans — specifically, in 2008 budget authorizations by Hillary Clinton and John W. Warner, then senators. The department’s climate modeling is based on sophisticated Navy and Air Force weather programs and other government climate research programs at NASA and the National Oceanic and Atmospheric Administration.

The Pentagon and the State Department have studied issues arising from dependence on foreign sources of energy for years but are only now considering the effects of global warming in their long-term planning documents. The Pentagon will include a climate section in the Quadrennial Defense Review, due in February; the State Department will address the issue in its new Quadrennial Diplomacy and Development Review.

Although military and intelligence planners have been aware of the challenge posed by climate changes for some years, the Obama administration has made it a central policy focus.

Gee, the Pentagon came to its conclusions without relying on the hoaxes of the IPCC, Intergovernmental Panel on Climate Change? Quelle surprise!

It's been estimated that climate change already claims a thousand lives each and every day, a number that's only going to increase rapidly over the next few decades. Some, such as Gwynne Dyer, even foresee the possibility of climate change-driven nuclear war.

Who's to blame? We all are in our own way. We in the West with our huge houses, our SUVs and our holidays abroad can't shirk our responsibility for the suffering we've already inflicted on others. We've been negligent of others in our behaviours and our appetite for consumption and waste. But there are a small number whose conduct has veered well past the realm of negligence, those who have, for money, sought to obstruct public acceptance of the truth - and consequences - of global warming driven climate change. There is no blind innocence or naivety among these people. They did what they did quite knowingly and in pursuit of their own vested interests. Surely the carnage of today and the carnage to come lies most heavily on their shoulders, right where they chose to place it.

What are we to do with these reprobates?
Posted by The Mound of Sound at 6:22 PM

Hopefully this will confuse conservatives everywhere when they are presented with the dilemma of confronting global warming or endangering national security.

Ah, YL, the fierce partisanship of youth. I hope this doesn't confuse conservatives in the slightest. What I want to see - tomorrow if not sooner - is nothing short of a complete sea change in their attitude toward global warming. Nothing would please me more than to see a critical mass of them "get it" as quickly as humanly possible.

We need the right... at least the rational right.

Unfortunately the rational right has been overtaken by the current batch of right wing loons.

You're right Dan but there's hope that the Pentagon's upcoming Quadrennial Defense Review will shake things up. I'm hoping that the likes of Glenn Beck will suddenly be cast as anti-American, shills willing to sell out America's security. Wash that whole bunch of FOX News slime down the gutters where they so deservedly belong.

There is hope, but given the response from Morano, it isn't much hope.

A Crank is someone who cannot be turned.