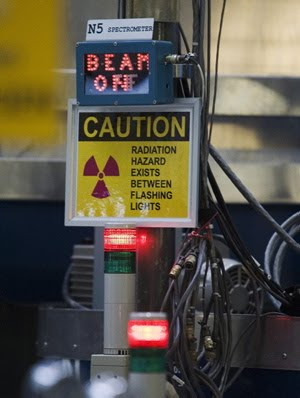 Just a few decades ago we put a man on the moon. Now we can't even maintain a reliable supply of radioisotopes for essential medical diagnostics.

Stephen Harper, whose "know nothing/do less" government has grossly mismanaged Atomic Energy of Canada's Chalk River plant, has brought Canadian production of isotopes to a grinding halt. There's talk of the Chalk reactor being up and running again by year's end but a lot of desperate customers aren't holding their breath.

Now it appears there are problems with Holland's Petten reactor that supplies fully half of all isotopes used in the United States. According to the Los Angeles Times, thousands of lives are in jeopardy and there are no answers in sight:

The shortage "is one of the greatest threats to our profession of modern times," said radiologist Robert W. Atcher of the University of New Mexico, last year's president of SNM.

The focus of this shortage is a short-lived radioisotope that most patients have probably never heard of -- technetium-99m, the "m" standing for metastable. With a half-life of only six hours, the isotope allows physicians to examine bones and blood flow, among other things, then quickly disappears from the body, minimizing the dose of radiation received by the patient. Because of its short half-life, the isotope cannot be stockpiled and must be used within a day or two after it is produced.

Every day of the year, nearly 55,000 Americans and tens of thousands of patients in other countries undergo nuclear medicine tests -- such as checking for the spread of cancer to the bones or monitoring the flow of blood through the heart -- most of them using technetium-99m. The radioisotope is attached to chemicals that allow it to bind to specific sites in the body, where it emits gamma rays that can be used to produce an image of the area.The technetium-99m used in these tests is produced in five reactors around the world, all of them at least 45 years old and none of them in the United States.

Three times within the last 18 months, the National Research Universal reactor in Chalk River, Canada, which normally supplies about a third of U.S. technetium-99m demand, has shut down because of leaks of radioactive tritium-contaminated water. On May 14, it shut down for the third time, and it will not reopen until the end of the year. Some experts suspect it will never reopen if a containment vessel is badly corroded.

Even if it reopens, its long-term prospects are not good. Canadian Prime Minister Stephen Harper said this year that the country would be out of the radioisotope business by 2016 because of repeated failures to bring a new reactor online. "We can't spend hundreds of millions of dollars and never produce an isotope," he said.

Last month, the Petten nuclear reactor in the Netherlands, which supplies half the U.S. requirement, shut down for a month for routine maintenance and it is expected to close for at least three months next year for repairs.

What's the answer? Don't ask Prime Minister Dopey. He's about as adept at handling the Chalk River crisis as he was in bracing Canada for the recession. With SHarper at the helm, we've all got reason to worry.
Posted by The Mound of Sound at 5:53 PM

Many experts have said to try and get the Maples going.

An important issue that keeps fallling off of people's radar, unfortunately. There's a lot of good work done at impolitical's site on the whole Lisa Raitt and the Isotopes crisis