Screw the Planet, Screw Your Kids and Screw You! 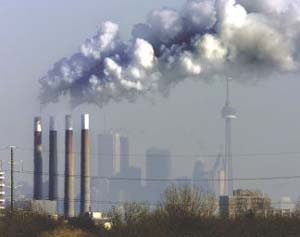 They're pulling out all the stops to undermine the upcoming debate in the US Senate over legislation to curb greenhouse gas emissions.

America's fossil fuel industry knows that the key to disrupting international action to tackle global warming lies in Washington. America is the key to global consensus. Around the world, all eyes are on the US. The Copenhagen climate summit, which some believe is our last best chance to avert truly calamitous climate change, is barely a few months away.

What it all boils down to is that the climate change issue may be Obama's and the American Congress' "bridge too far." Big Oil and Big Coal sense their opportunity and, according to the Washington Post, they're striking back hard:

The oil lobby was sponsoring rallies with free lunches, free concerts and speeches warning that a climate-change bill could ravage the U.S. economy.

But when environmentalists showed up in this college town -- closer than ever to congressional passage of a climate-change bill, in the middle of the green movement's biggest political test in a generation -- they provided . . . a sedate panel discussion.

And they gave away stickers.

...It seems that environmentalists are struggling in a fight they have spent years setting up. They are making slow progress adapting a movement built for other goals -- building alarm over climate change, encouraging people to "green" their lives -- into a political hammer, pushing a complex proposal the last mile through a skeptical Senate.

Even now, these groups differ on whether to scare the public with predictions of heat waves or woo it with promises of green jobs. And they are facing an opposition with tycoon money and a gift for political stagecraft.

Of course, who are we to criticize? Here in Canada the leaders of both major parties are unrepentant Tar Sands boosters. Even Jack Layton dummies up when it comes to climate change lest he be seen as supporting even a small tax on SUV juice. Self-serving cowards, the lot of them. Harper has EnviroCan's top climate scientists gagged and locked away in a closet and that's just fine with Ignatieff and Layton. Ignatieff even proclaims the Athabasca bitumen a "key to national unity."
Posted by The Mound of Sound at 6:49 AM

Yup I'd say the debate is over, Cap&Trade is dead. And good riddance. Once this thing is crushed in the US Senate, it will be politely killed off in Canada nationally. However, rich polluting provinces like Ontario and Quebec can run their own Cap&Tax systems if they like. Besides, they need this new tax; they have the lowest power rates in North America while the rest of Canada pays double that amount. Ever notice how in the Maritimes there are so many clotheslines in everyone’s back yard? Because their power rates are so high. And whenever I visit Ontario I am astonished at how people waste power, even the Greenies waste power compared to the rest of Canadians. So go ahead Quebec and Ontario, Cap&Tax yourselves to death and catch up to the rest of Canada, you need it.

We need to be developing environmentally friendly communities. Sustainable living such as buying local produce, building cob housing, using very effective comfortable public transportation using solar electricity. There is a group of people who got together in England and Australia who are doing just that and they have not returned to the dark ages either but rather are using modern know how to produce what they need. If we wait for government to do what is needed to protect the Canadian environment we will be waiting a long time. Therefore we as an educated people have to take matters into our own hands and not be so dog-gone lazy sitting around complaining. Most everthing bought in Canada is American made and when we purchase American products especailly from the likes of Walmart, the money does not stay here but finds its way across the border. A. Morris

Well AM, we need a lot of things, your ideas included. Above all else, however, we need a genuine, meaningful agreement to emerge from the Copenhagen summit in December.

Without that, all else is pretty much for naught... a disconnected, ineffective array of noble gestures.

I wouldn't fret too much about our trade balance with the US. It has remained unhealthily in our favour for decades. And much of the stuff we buy from Wal-Mart isn't American-made but imported from China or Southeast and South Asia.

While I do admire these local initiatives the past few years have made it increasingly obvious that climate change is a problem that is indeed global in scope and can only be addressed (not solved unfortunately) with a genuinely global effort.

Why global? Because climate change won't be felt consistently. It will arrive in some places (it already has) years, perhaps even decades before it reaches others. Some places will be extremely hard hit, others less so. If nations respond to global warming as it appears and to the extent of impact, we'll wind up with a hoplessly disjointed, patchwork response and will achieve nothing.

Another reason that a unified, global approach is necessary is that our problems aren't limited to global warming but extend to a raft of potentially existential threats, all of which will require global agreement. Everything from species extinction to resource exhaustion to deforestation and desertification, to nuclear proliferation and air, land and water pollution - all of these problems can only be solved by global consensus and action. That's because each of these problems will require local and distant remediation with some measure of readjustment (i.e. sacrifice). If solutions aren't equitable they'll be ineffective and, on a global scale, we've really never had to allow equity to drive our policies and negotiations.

Yes....I do know where merchandise bought from Wal-Mart comes from and was the reason I mentioned it. And now the Chinese have bought into the Tar Sands and why 60% and not 40%....will they be given special treatment in not having to abide by our pitiful laws regarding the environment...just like the pork venture. I wonder how Washington will react to this. A. Morris