A Civil War in Waiting? 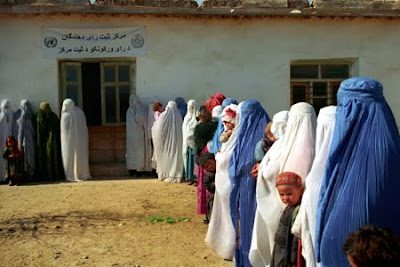 We've abandoned all our nonsense about democracy and the claptrap about women's rights. You can lower a lot of expectations over the span of eight years but, eventually, you get to the bottom of the barrel. That's when you set your sights on establishing something, anything in the way of a functioning government that can hold itself together just long enough for you to get the hell out. And that's where we, the US and NATO, are at today in Afghanistan. But some are now asking whether even that is too much to hope for. From The New York Times:

Privately, American officials set out a number of possible ways that the election aftermath could affect their operations. During a meeting on Thursday, Gen. Stanley A. McChrystal, the leader of American and NATO combat operations here, discussed how the military would have to adapt to each.

Particularly worrisome was the specter of a divisive ethnic presidential runoff between Mr. Karzai, whose power base is in the Pashtun south, and Mr. Abdullah, whose main support resides in the Tajik and Uzbek north, officials said.

Mr. Karzai himself has in the past raised the specter of ethnic violence, telling officials that if there was a runoff it could lead to a civil war, Western officials said.

...For all of their worry about the problems that a runoff could bring, administration officials have also made clear they are not enamored of the Karzai government, and the president’s re-election would not be risk-free, either.

Mr. Obama, during his first news conference as president, criticized the Karzai government as “detached.” And administration officials have complained of Mr. Karzai’s failure to crack down on corruption and the drug trafficking fueling the insurgency. Western officials have also criticized Mr. Karzai’s alliances with unsavory figures to try to secure re-election.

Should Mr. Karzai win, either outright or in a second round, Obama administration officials could find themselves with a president who has engaged in so much deal-making that he may well be even more beholden to warlords than before.

For the past six years at least, Afghanistan has come to resemble a civil war on hold as the major players waited to see how well we would deal with their nemesis, the Taliban. Everyone, even us, knew that Hamid Karzai was much too weak to bring order, to stand up to his country's warlords. He couldn't eradicate them. Instead he had to embrace them, share power with them, just to survive.

Today the Western nations would be more than content to accept strongman rule in Afghanistan because there really is no other way out for us. The trouble is, strongman rule doesn't evolve out of a ballot box. It arises from the brutal suppression of all rivals. Its genesis lies in civil war. That's where Afghanistan was when we showed up eight years ago and that's where it'll be yet again when we leave.
Posted by The Mound of Sound at 6:29 AM

Obama and the USA are irrelevant. They've created Afghanisnam but the industrial/military complex won't let them off that hook.
As if that isn't enough, the deregulation that a demented Regan started still awaits correction.
Nothing changes;the tail wags the dog.