Don't Those Brits Know We're Not Supposed to Talk About Climate Change? 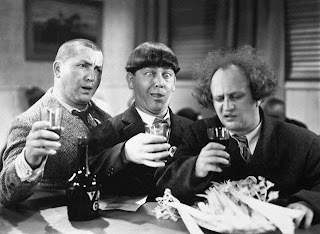 Steve knows, Mike knows, Jack knows - we don't discuss the inescapable impacts of global warming driven climate change. Mum's the word, out of sight/out of mind, nothing to see here - move along.

The Brits are screwing everything up, leaving Canada's Unholy Trio looking like total chumps. First it was their Energy Secretary releasing a "best case scenario" report on the warming that's going to be experienced in various parts of Britain based on the carbon that has already been emitted to the atmosphere. We don't want to talk about those things in Canada. The Canadian people are happier, even if not necessarily healthier or safer, if they're kept in the dark.

Now that Brit Energy Secretary has done it again. This time Hilary Benn is calling for a "radical rethink" of the way his country produces and consumes food. He wants Britons to "think"? To think about food consumption and food security? Is he mad, a complete nutter?

That damned Benn and his reports. This time the government has issued a report outlining the very real threats to Britain's food security. From The Guardian:

The assessment showed that future global food supplies could be threatened by the impacts of climate change on where crops can grow, increases in the incidence of animal diseases and water shortages.

It also issued a warning over the depletion of fish stocks around the world, as well as the impacts on the natural world of expansion of crops grown for fuels and a growing population eating more.

But with rising yields in cereals and uncropped land that can be brought into production, the UK can contribute to global food security, the assessment said.

Across the world, it has been estimated that production will have to rise by 70% by 2050 to feed a global population of 9 billion.

...Benn said he wanted British farmers to produce as much as possible, but they needed to do so in such a way that took account of a changing climate and the need to tackle global warming emissions — to which agriculture is a significant contributor.

..."We need a radical rethink of how we produce and consume our food," he said. "Globally we need to cut emissions and adapt to the changing climate that will alter what we can grow and where we can grow it. We must maintain the natural resources - soils, water, and biodiversity - on which food production depends. And we need to tackle diet-related ill health that already costs the NHS and the wider economy billions of pounds each year."

Moments like this make you proud to be a Canadian, a free people where we don't have to think about the perils to come, comfortable in the knowledge that what passes for political leadership in our country isn't thinking about them either.
Posted by The Mound of Sound at 9:22 AM