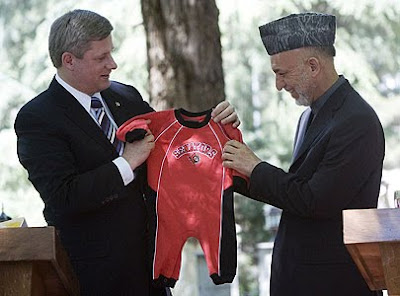 Prominent Americans are beginning to compare Afghan president Hamid Karzai to an earlier troublesome leader, South Vietnamese president Ngo Dinh Diem who was murdered and removed from power in Saigon in 1963 in a US-backed military coup during the John F Kennedy administration.

David Kilcullen, former counter-insurgency advisor to General David Petraeus in Iraq, drew the parallel while speaking to the US Institute of Peace:

"He [Karzai] is seen as ineffective; his family are corrupt; he's alienated a very substantial portion of the population. He seems paranoid and delusional and out of touch with reality. That's all the sort of things that were said about President Diem in 1963."

Then again, who wouldn't be a bit paranoid in Karzai's situation? Washington wants him gone, preferring Tajik rival Abdullah Abdullah. That's driving Karzai ever deeper into the arms of his country's worst warlords.

...the vicious media attack on Karzai continues. Elizabeth Rubin of The New York Times magazine quoted a Western intelligence official as saying, "The Karzai family has opium and blood on their hands ... When history analyses this period and looks at this family, it will uncover a litany of extensive corruption that was tolerated because the West tolerated this family."

Anthony Cordesman, senior foreign policy analyst at the Center for Strategic and International Studies who just visited Afghanistan to assist US commander General Stanley McChrystal in the preparation of the Pentagon's review of the current situation, wrote in the Times newspaper that Karzai's government is "corrupt, grossly over-centralized, lacking in capacity and virtually absent in large parts of Afghanistan". In an article in The Washington Post last week, US ambassador to Afghanistan Karl Eikenberry ostentatiously distanced the US from Karzai.

...Abdullah's camp openly threatens to create an "Iran-like situation" in Kabul if Karzai pulls off victory in the August 20 round. If violence ensues, the Tajik-dominated Afghan security will be hard-pressed to control the situation and foreign forces may need to intervene, which is hugely controversial.

On the other hand, if a runoff becomes necessary, a date needs to be fixed for that, which cannot be earlier than end-October. Meanwhile, the Abdullah-Ghani combine, with tacit encouragement from the US, is bound to challenge the legitimacy of Karzai running a government even after its mandate expires on August 20. But Karzai will most certainly resist any demand on him to step down.

... Behind all this looms the grim reality that the Afghan body polity has been hopelessly split on ethnic lines. The election campaign has aggravated the creeping ethnic polarization. Every political issue today takes ethnic overtones. The US should have anticipated this and taken the lead to create a level playing field but instead it narrowly focused on ousting Karzai.

If this assessment is right, Afghanistan is poised to fracture along ethnic lines as the result of this election. There's plenty of reason to fear an anti-Western backlash also following the vote. And we thought the Taliban were trouble enough.

http://www.atimes.com/atimes/South_Asia/KH15Df04.html
(photo - Hamid Karzai shows SHarper the size suit he'll be wearing after the Americans finish carving him up)
Posted by The Mound of Sound at 9:36 AM

The suit is actually a gift from Xe Services formerly Blackwater - a perfect fit.