Climate Change - India Doesn't Get It 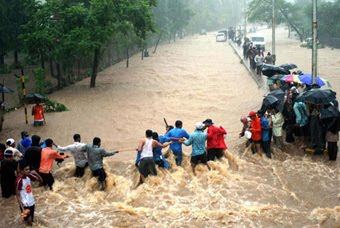 Today's New York Times has a story showing how difficult it can be for local authorities to grasp the reality, much less the nuances, of global warming-driven climate change. In the Indian port city of Mumbai (formerly Bombay) rampant growth continues apace without regard for the climate change that has already arrived.

“Climate change involves a shuddering of the weather thermostat,” said Bittu Sahgal, a leading environmentalist and the editor of Sanctuary Magazine. “More rain in one place, less in another. The problem is unpredictability. Mumbai’s rains this year were delayed but the city has been on alert for floods.”

According to Mr. Sahgal, climate change is going to increasingly “mock” economists.

“As a coastal city we should have been in top gear already, to adapt to climate impacts. Instead we see ignorant planners filling wetlands, planning construction on low-lying salt pan lands and otherwise adding to Mumbai’s heat sink effect by removing over 100,000 old trees,” Mr. Sahgal said — adding, that developers in Mumbai are “behaving as though climate warnings are an American ploy to prevent India from enjoying the fruits of industrial activity.”

Mumbai has become increasingly susceptible to highly destructive and deadly flooding as spreading development has been allowed to take out drainage canals and rivers. When heavy rains hit the sewer drains often become blocked with rubbish, making the problems worse yet.

While there are signs that New Delhi is slowly coming around on global warming, it's going to face enormous hurdles convincing state and municipal authorities to change accordingly. Those are the sort of hurdles that cost lives.
Posted by The Mound of Sound at 6:36 AM

Email ThisBlogThis!Share to TwitterShare to FacebookShare to Pinterest
Labels: India