"Dying for Nothing" - Gwynne Dyer's Take on the Afghan Election 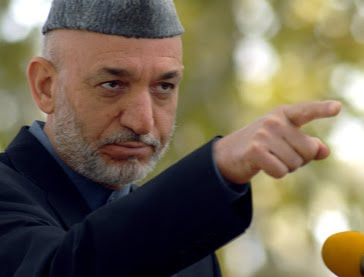 Our top political leaders may claim the Afghan elections were a great success - but they're full of crap. Fortunately there are some who'll speak the unvarnished truth, people like Gwynne Dyer:

...we are asked to believe that an election will restore confidence in the government. It is nonsense: this election has no more relevance than the ones that the United States used to stage in Vietnam. Col. David Haight, commanding the 3rd Brigade Combat Team of the US 10th Mountain Division in Logar and Wardak provinces near Kabul, was helpfully indiscreet about it in a recent interview.

"I think that apathy is going to turn into some anger when the administration doesn't change, and I don't think that anybody believes that Karzai is going to lose," Haight told an embedded reporter from the Guardian. "There is going to be frustration from people who realize there is not going to be a change. The bottom line is they are going to be thinking: 'Four more years of this crap?'"

Unless bribery, blackmail and threats no longer work in Afghanistan, Karzai is going to win. He isn't even bothering to run a conventional campaign: he bailed out of a televised debate with the other presidential candidates at the last moment, and leaves it to them to hold election rallies in provincial towns. He has made his deals with the warlords and the traditional ethnic and tribal powerbrokers, and is counting on them to deliver victory.

Karzai and the United States are shackled to the warlords because those were the allies that the US recruited to fight the Taliban on the ground when it invaded Afghanistan in 2001. The Taliban, being exclusively Pashtun, never controlled all of the country; Tajik, Hazara and Uzbek militias continued to hold out all across the north. So the US made deals with their leaders, showered them with weapons and money, and helped them into power instead.

Western rhetoric insists that the hills of Afghanistan are directly connected to the streets of Manhattan, London and Toronto. But no Afghan, not even any member of the Taliban, was involved in the planning or execution of 9/11, nor in the later, lesser attacks elsewhere in the West. Nor would the Taliban sweep back into power if all Western troops left Afghanistan tomorrow; the other players are still in the game.

Everybody who dies in this conflict is dying for nothing, because it will not change what happens when the foreign troops finally go home. As they eventually will.

Dyer is a prophet. Always has been.