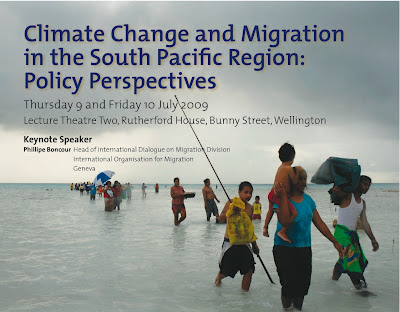 Now this is a touchy subject for us in the West - climate migration - the mass migration of people from regions rendered less habitable or even uninhabitable by global warming-driven climate change.

Mark my words, this is where our humanitarian self-image is going to collide with reality.

Here's how the United Nations Humanitarian Affairs office puts it:

Specialists studying the likelihood of population movements due to climate change effects offer widely divergent predictions. But most agree policymakers must understand that migration is a vital coping mechanism for at-risk populations and must do more to help destination hubs prepare.

“Migration and mobility are always seen as exceptions but they are the norm. Mobility helps people get out of poverty,” said Cecelia Tacoli, senior researcher with London-based NGO the International Institute for Environment and Development. “If people affected by climate change lack access to resources or need to diversify their income sources, this lack should be [addressed] rather than be seen as a problem.”

In moderate to severe-climate change scenarios, mass migration invokes the 'overloaded lifeboat' dilemma. Do we allow the masses to clamber aboard the lifeboat and, if so, how many or do we simply beat them with the oars to save ourselves? You may find that a silly notion but it is expected to be addressed in the Pentagon's upcoming Quadrennial Defense Review. Gwynne Dyer in his latest book, Climate Wars, says some American military leaders foresee a day when America will transform its border with Mexico into a free-fire kill zone.

And it's not just keeping Central and South Americans out that's driving this scenario. It's the prospect of an America struggling with its own, home grown mass displacement and resettlement due to coastal inundation and inland groundwater exhaustion. Even a moderate climate-change scenario could see America with its hands full simply accommodating internal climate migration.

It's the troubling realities of climate migration that will probably leave the West unwilling to discuss measures to actually facilitate or speed up migration. I think that's where we're going to find the real depth of our humanitarianism.
Posted by The Mound of Sound at 10:13 AM

There's enough food in the world right now, if we were fair with it, that no one need starve. We can't even accomplish that now. If there's a basic "universal human right" its access to food and clean water. De Jure that may be the case, De Facto? Humanity FAIL.

What will drive mass migration? That lack of access of food and water. And in that scenario we'll have even less than we do now. As the lifeboat analogy indicates, there won't be enough to go around practically, even if we were being fair.

I wish I could agree about the sufficiency of the world's food supply. With problems such as desertification, soil exhaustion, groundwater depletion, disruptions in rainfall patterns, rising sea water levels and the headlong retreat of glaciers, I think the security of the world food supply has never been worse. Just look at how global grain reserves have plummeted.

The British environment secretary, Hilary Benn, released a report last month on the threats to Britain's food security and calling for 'radical' changes to British agriculture.

Water is the most significant problem but there are many other factors coming to the surface right now.

I'm glad to see that you have come around to climate migration. I remember saying this to you in 2007and you sort of agreed. What we will have to worry about in Canada is a migration from the south of our border. A. Morris

Well I didn't say how long we had enough food for the entire world!

But yeah I got your point.

The GHG emissions of western countries since the Industrial Revolution are largely responsible for climate change. In a worst case scenario if people in developing countries are starving and being driven from their homes because of climate change, how can the developed countries deny them the basic necessities of life, food, water and shelter? Mass migrations would be a nightmare however, and the preparation of "destination hubs" seems one possible solution.

Unfortunately the only destination hubs the West is interesting in considering are NIMBY. However, if you trace the sanctuary path foreseen by most climate scientists, the retreat from uninhabitable warming heads directly to the West (and Russia). Absent some natural cataclysm or nuclear war, I expect we'll eventually have to kill them off. I know how distasteful that sounds but, in reality, it merely replicates the various resource wars already underway in the most disadvantaged corners of the world.

Kill them off? When droughts and famines occur in African nations, we are not directly responsible but we send humanitarian aid. In a worst case climate change scenario, refugees would be victims of our own economic growth ... and we are going to kill them off? If we are able to give humanitarian aid, surely we would. Of course, if civilization breaks down completely then it will be everyman for himself.

There's no way to justify it LMA but that's exactly what's being contemplated. Get a copy of Gwynne Dyer's "Climate Wars" or check out the 3-part radio series of the same name on CBC "Ideas". There's an enormous amount more to this issue than our leaders are willing to acknowledge much less discuss.

A world impacted by runaway climate change is going to become an extremely dangerous, brutal and scary place.

The grandfather of this whole climate change business, 90-year old James Lovelock, foresees a giant "kill off" in this century that will see mankind go from 7+ billion to a few hundred millions. If that does indeed come to pass (and the writing may be on the wall this December in Copenhagen) we're going to see death on a scale hitherto imagined only in science fiction. I'm enternally grateful that I won't be around to have to watch it unfold.