Out of Sight/Out of Mind - the Misery of Gaza 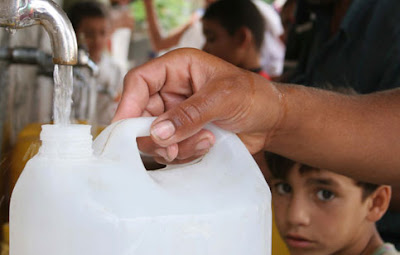 Canadian politicians, including our own global peace expert Ignatieff, don't hesitate to weigh in on Gaza so long as the place is getting pummeled by the Israeli military. The rest of the time, who cares?

Iggy backed the Israeli side during the last onslaught, pretty much absolving the Israelis in advance for the war crimes that ensued. Now there's a dedicated man of peace for you. Lest there be any doubt about Ignatieff's appalling lack of judgment, the United Nations has just released its report into the tragedy, finding that both the Israeli forces and Palestinian armed groups committed war crimes and possibly crimes against humanity to boot. From The New York Times:

The four-member mission, led by Justice Richard Goldstone, a widely respected South African judge, also concluded that neither Israel nor the Palestinian groups had carried out any “credible investigations” into the conduct of the war. If that did not change within six months, the United Nations Security Council should refer the situation to the International Criminal Court in the Hague for possible prosecution, the panel concluded.

“The prolonged situation of impunity has created a justice crisis in the Occupied Palestinian Territory that warrants action,” the members said in their 574-page report on the war, during which some 1,200 Palestinians were killed, including at least several hundred civilians, and 13 Israelis died, 10 soldiers and 3 civilians.

It's too bad that Iggy chose to ignore what Liberals have long known - that there are almost never any clean hands in these conflicts. But there are dirty hands in abundance.

Today's Gaza is undergoing something akin to a medieval siege. We've probably all seen the movies where the attackers surround the castle, cutting off food and water to the defenders inside until they surrender or die. Welcome to Gaza, 2009.

The decrease in useable water reserves has also been linked to climatic changes, such as lower rainfall, which have slowed the recharge rate of the aquifer. Other factors are a rapid population growth and increasing suburban sprawl, leaving little space for rainwater catchment areas.

...“Unlike the West Bank, Gaza is ‘downstream’ of the portion of the aquifer that lies beneath Israel, with lateral groundwater flows coming from Israel into the Gaza portion of the aquifer,” Ghannam said. “The groundwater underneath Gaza is becoming limited due to Israel’s construction of trap wells [about 27 wells] inside Israel, along Gaza’s eastern political border, siphoning water supplies from the aquifer before they reach Gaza.”

According to the Israeli Water Authority, the Gaza aquifer has no impact on Israel and Israel does not prevent the flow of surface water or groundwater to the Gaza aquifer. Blockade Since 2005, Gaza’s water supply has also been affected by restricted access to power, fuel and spare parts, the World Bank said.

Equipment and supplies needed for the construction, maintenance and operation of water and sanitation facilities have been denied entry to Gaza under the more that two-year Israeli blockade of the enclave, tightened after Hamas seized power in June 2007. Israel says that for security reasons it cannot allow certain materials into Gaza.

Gaza’s wastewater infrastructure, which provides partial and intermittent water treatment, is also in desperate need of repair. Most sewage goes raw to lagoons and the sea, or seeps through the soil and reaches the aquifer, according to the World Bank report.

Of course a lot of these claims come from that known terrorist sympathizer, the World Bank. It's incredible. We sit mute while Israel maintains the siege of Gaza and then condemn the Gazans if they retaliate with a handful of hapless rockets.
Posted by The Mound of Sound at 9:45 AM

Email ThisBlogThis!Share to TwitterShare to FacebookShare to Pinterest
Labels: Gaza

And with Iggy at the helm of the Liberal and his pandering to Israeli/Jewish( or whatever they want to call themselves) interests in Canada that is unlikely to change.

It's a shame when principles are so easily corrupted in the quest for votes...

Unfortunately CWTF, you're right. I so wish you weren't.

What Iggy and the rest of the Israel lobby in parliament won't mention is that access to water resources will ensure that Israel never, I repeat "never", will be able to accept peace with the Palestinians.

Israel is utterly dependent on control of the Palestinian's aquifer in the West Bank and the last thing they're interested in is seeing water squandered on Gaza.

There can be no peace while Israel's survival depends on excluding Palestinians from their own water resources. Israel knows that better than anyone else other, perhaps, than the Palestinians.