Eww, Grandpa's Got the Clap Again! 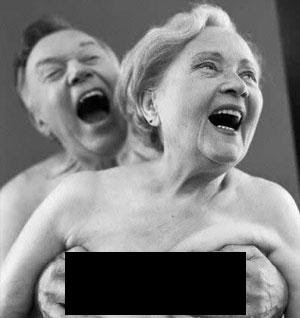 Don't believe the "golden years" bullshit. There's nothing nice about getting on except, perhaps, the alternative.

Modern prescription and over-the-counter medications do help... with the arthritis and irregularity, even breathing. And then there's Viagra, the miracle answer to flagging... well, you know.

But, according to the Annals of Internal Medicine, Viagra is turning out to be a double-edged sword (pardon the pun). From Reuters:

"...the rate of sexually transmitted diseases (STDs) in older men taking erectile dysfunction drugs like Viagra is twice as high as in their non-medicated peers.

In both groups, however, the numbers are swelling. According to the Centers for Disease Control and Prevention, there were more than six new cases of STDs per 10,000 men over 40 in 2008, up almost 50 percent since 1996.

"Younger adults have far more STDs than older adults, but the rates are growing at far higher rates in older adults," said Dr. Anupam B. Jena of Massachusetts General Hospital in Boston, who led the study.

While the reasons for this development aren't well understood, he said more divorces and better health might have conspired to boost sexual prowess and activity among graying heads.

The problem, however, is that older adults appear to flaunt safe sex practices. For instance, the researchers note, 50-year-olds are six times less likely to use a condom than men in their 20s."

So, if you can't figure out what to get your geriatric lothario this Christmas, consider stuffing his sock with condoms.
Posted by The Mound of Sound at 8:35 AM

When you get to be a certain age, who cares? You're going to die soon anyway, why not have some fun.

So Jynn Parrett....having sex is the only way to have fun??? Gawd you old men who are trying to recapture your 20's are stomach turning. You all seem to be so sleezy....yuck!!

On Anon, lighten up! Besides, Jymn never said that having sex is the "only" way to have fun and I think you're assuming he's an old man. Don't think you're right on that score either.