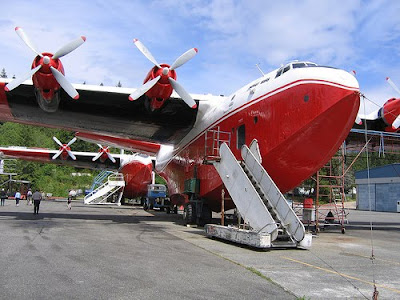 You see them at anchor on placid, Sproat Lake near Port Alberni.   They're two magnificent, 73-tonne Martin Mars water bombers, the biggest in the world and the last of their kind.   Did I mention that they're big, really, really big?

These ships have a special ability.   They can often kill a fledgling fire before it can grow.   That is thanks to the 37,000 kilograms of water the Mars can drop in one pass.   That's 18-tonnes of fire drenching water at a time and that covers a good bit of ground.

The Mars is and always has been the world's largest operational flying boat.   Their wingspan exceeds that of the Boeing 747.   They're not fast and when you see them in the air their immense size and slow speed gives the illusion that they're not moving at all.

A couple of years back the Mars did a demonstration drop over the Vancouver waterfront to show what it could do if it was ever needed there.

As you may know, the island is in the throes of our summer drought.   The forest fire hazard rating is at "extreme."   July has been an astonishingly dry month - hot and dry.   At times like this it's nice to sit out on the patio of the Fish and Duck pub and gaze out at those two enormous water bombers at anchor out on the lake.
Posted by The Mound of Sound at 8:40 AM

You forgot to mention they make a nice alarm clock, loud as a train when they pass over your home.

Music to my ears, Troy. I love those planes, never more so than when they're nearby in the air. And they've played a big role in keeping this island from going up in flames. It's too bad they're getting so old and there's nothing that size on the horizon to replace them.